Top 8 Reasons to Invest in Myanmar 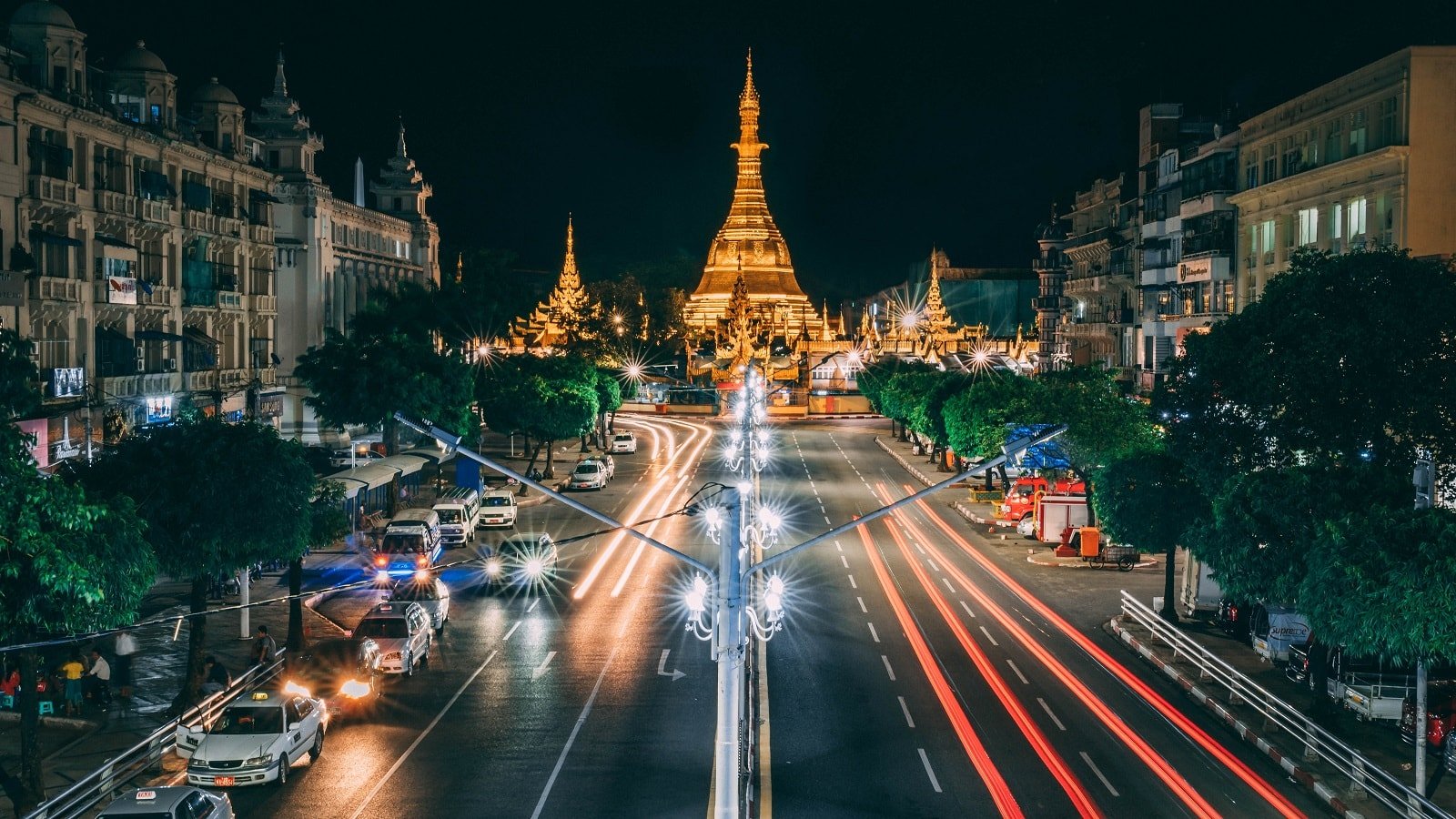 A few years ago, Myanmar’s prospects created great enthusiasm among the international investment community which, in the recent past, has cooled down. However, the fundamentals are still in place and the decision to invest in Myanmar at this stage can give you an early mover advantage.

In this article, we have listed the main reasons why investing in Myanmar could lead you to wildly profitable results.

One of the greatest assets of Myanmar is its strategic location in the center of Asia, between China and India. Myanmar’s position gives the country direct access to two of the largest markets in the world, with a total of more than 2.5 billion consumers.

Myanmar’s long coastline on the Bay of Bengal, which is home to several world’s major shipping lanes, provides excellent conditions for trading. Moreover, the shortest route from China to the Indian Ocean is through Myanmar, making the country a valuable link for China. 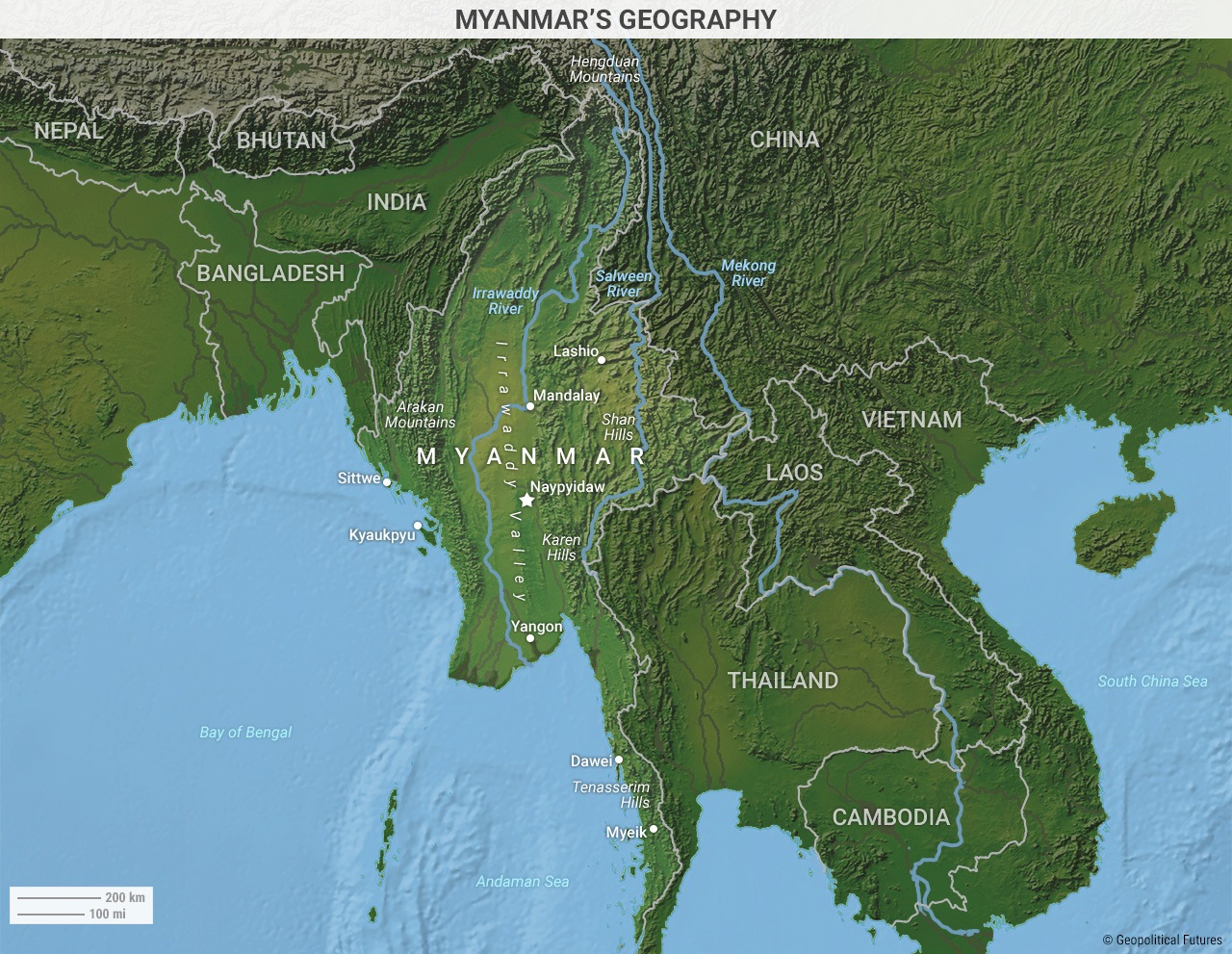 The two nations have also agreed to build the China-Myanmar Economic Corridor which will link China’s landlocked Yunnan and Myanmar’s Yangon with new roads and a high-speed railway and will increase investments and trade in the region.

Currently, the country’s population is about 53 million people, and the figure is increasing at approximately 0.9% a year. In 1960, an individual in Myanmar could expect to live to the age of 43. Today, the country’s residents have a lifespan of 66 years, and the median age in Myanmar is 27.9 years. 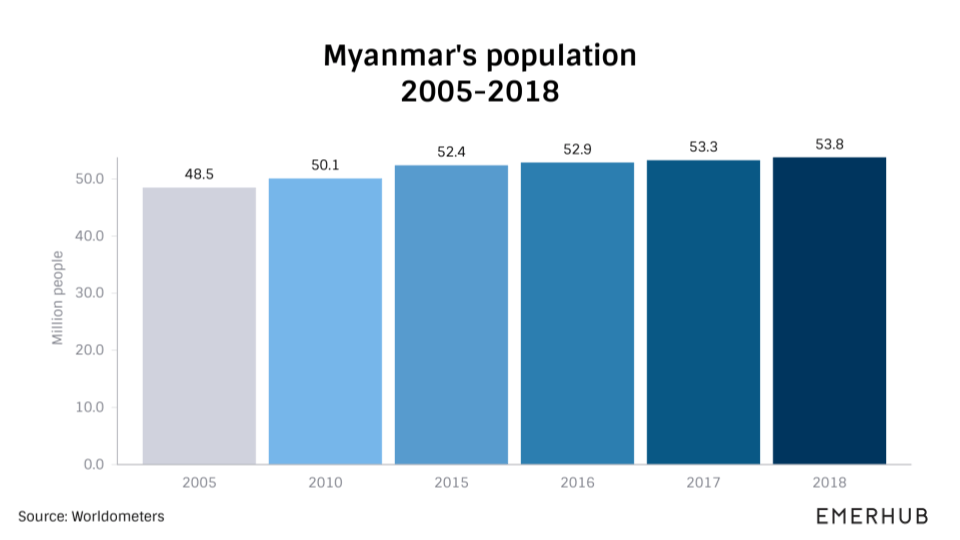 In addition to a growing population, various parameters show that poverty levels are falling and the economic condition of the nation’s residents is improving.

According to the World Bank, in 2005, nearly half of Myanmar’s population lived below the national poverty line. By 2010, this percentage had fallen to 42.4%, and by 2015, the poverty headcount ratio had improved to 32.1%.

Boston Consulting Group (BCG) predicts that the affluent and middle class in Myanmar will experience rapid growth and will reach 8 million consumers by 2020.

#3 One of the fastest economic expansions in Asia

The country’s GDP should maintain a healthy growth rate. The International Monetary Fund (IMF) projects an average GDP rise of 7.02% between 2019-2023. 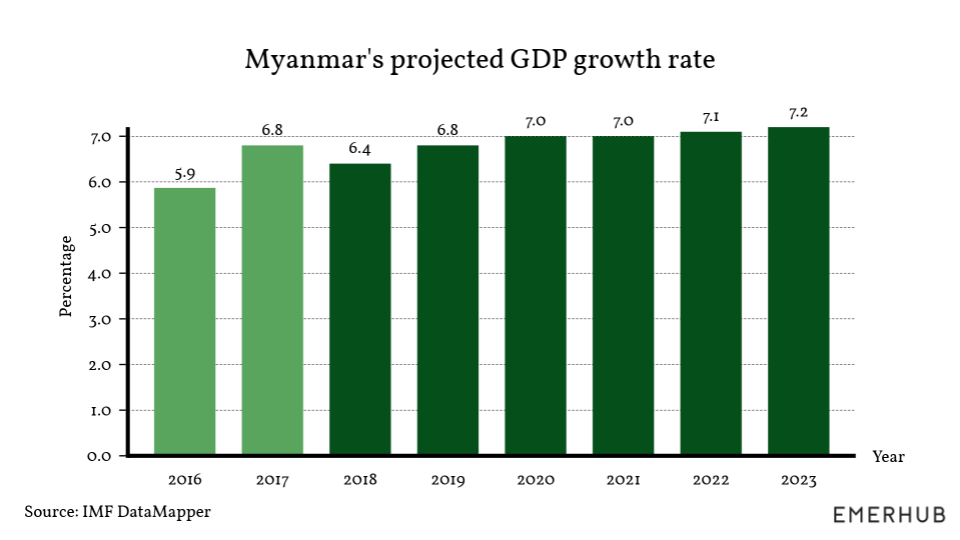 The manufacturing and service sectors now account for a more significant part of Myanmar’s economy. In 2000, agriculture, forestry, and fishing contributed 57% to Myanmar’s GDP. However, today, this stand has reduced to 26%, and the industrial (35%) and service (39%) sectors are gaining increasing importance.

It is also important to note that Myanmar’s economic growth since the commencement of reforms has been outstanding and highly promising. 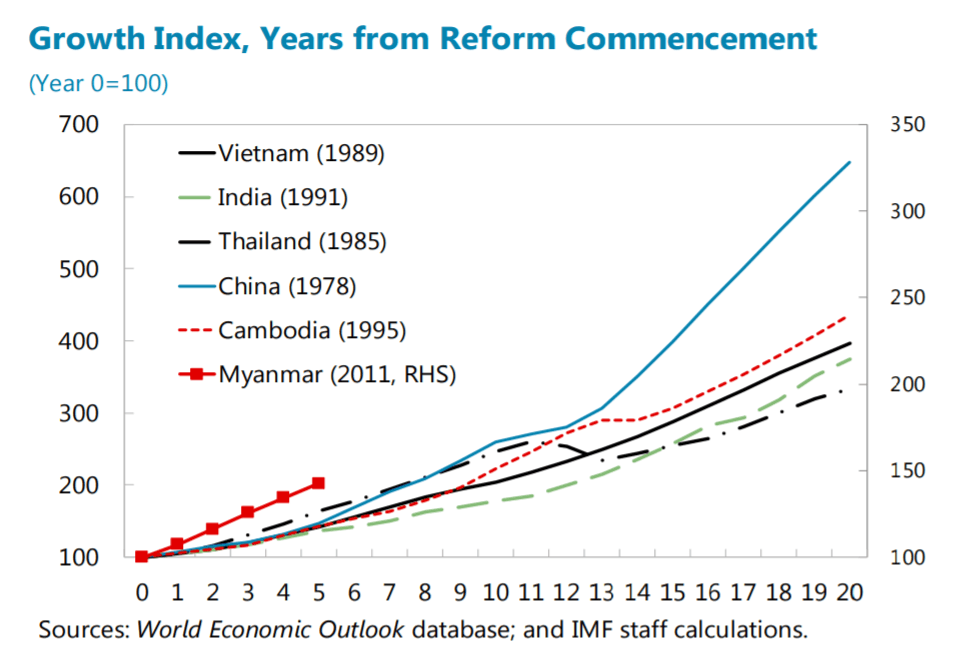 Myanmar’s wages are another great attraction for foreign companies that want to invest in Myanmar. Compared to other countries in the region, the minimum wage in Myanmar is significantly lower. 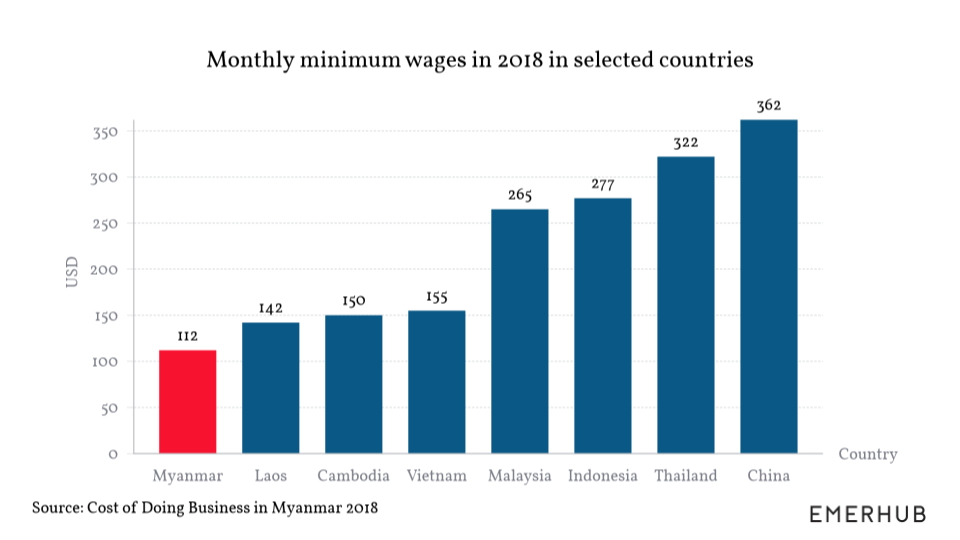 Another area that has achieved great success is the country’s garment and footwear industry. The EU is a significant export destination. Buyers include H&M, a Swedish multinational clothing-retail company, Primark, an Irish fashion retailer, Inditex, a Spanish clothing firm, and also Adidas, the German shoe giant. 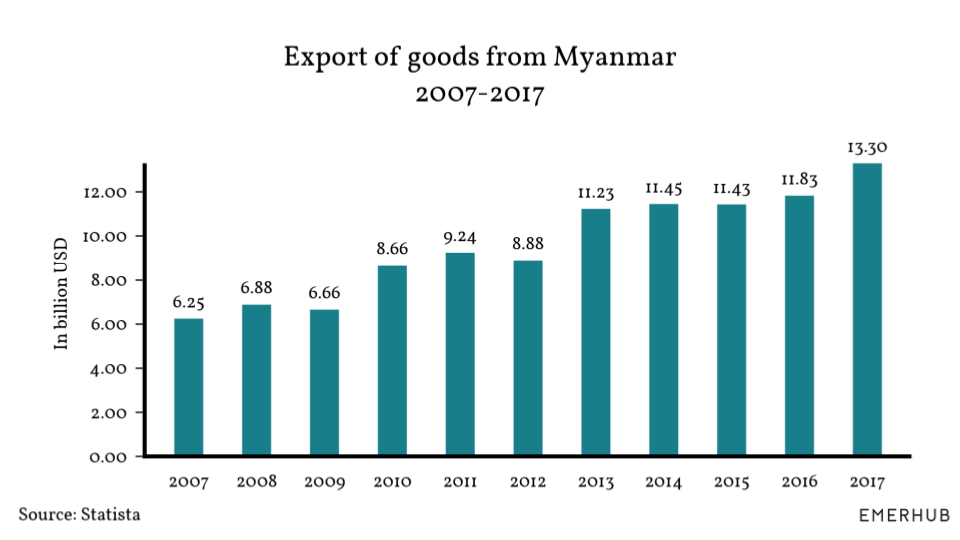 The country is a member of the World Trade Organization, and this facilitates the export of goods manufactured in Myanmar. As part of the ASEAN Free Trade Area (AFTA), Myanmar also participates in all intra-ASEAN trade agreements as well as trade agreements with:

As Myanmar is classified as a “Least Developed Country” according to the EU, it gives the benefit of the EU’s Everything But Arms (EBA) scheme. The EBA entitles Myanmar to export to the EU on duty- and quota-free basis.

Over the recent years, FDI inflows into Myanmar have grown significantly: 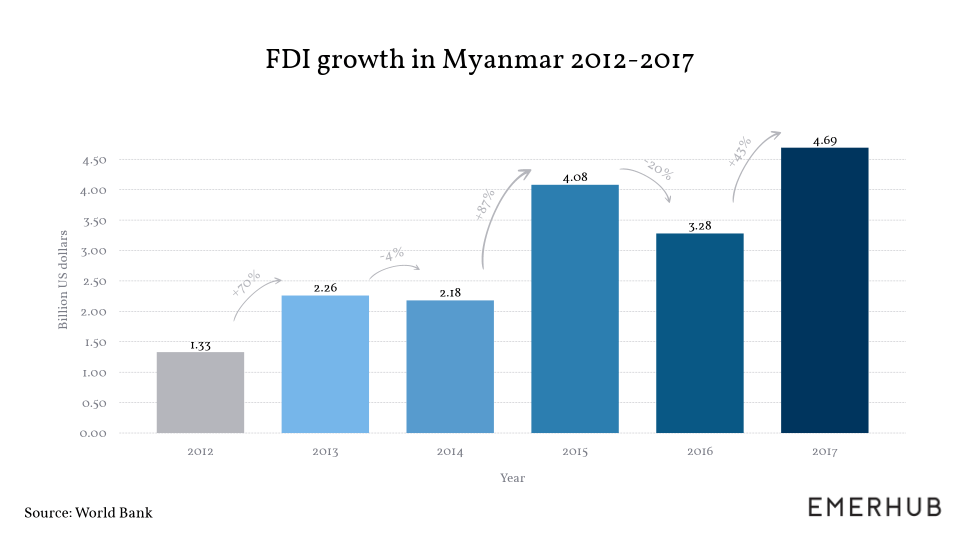 Myanmar has placed great emphasis on the need to increase the level of foreign direct investment. The target over the next 20 years? A massive US$ 220 billion.

The country proposes to increase FDI by focusing on infrastructure development and policies that would entice to invest in Myanmar.

Foreign investors in Myanmar can enjoy the benefits of the following incentives:

Myanmar allows full foreign ownership in most business classifications. There is also no official minimum capital requirement for setting up a business in Myanmar. However, to set up a service sector company, you will need a minimum capital of US$ 50,000 and US$ 150,000 for a manufacturing business.

Under the modified law, companies can register by using an online registry system. However, you would still need the presence of a certified lawyer or an accountant when shareholders sign the incorporation documents.

New investment laws are in place in Myanmar; however, in reality, they can be difficult to interpret. For this reason, many investors are holding a wait-and-see attitude which, in turn, provides lucrative business opportunities for early movers who will face less competition.

#8 Many foreign companies are investing in Myanmar successfully

China has been the largest investor in Myanmar. However, in recent years, other countries have stepped up their level of investment in the country.

For example, Japanese companies have taken advantage of the investment opportunities in Myanmar for several years. 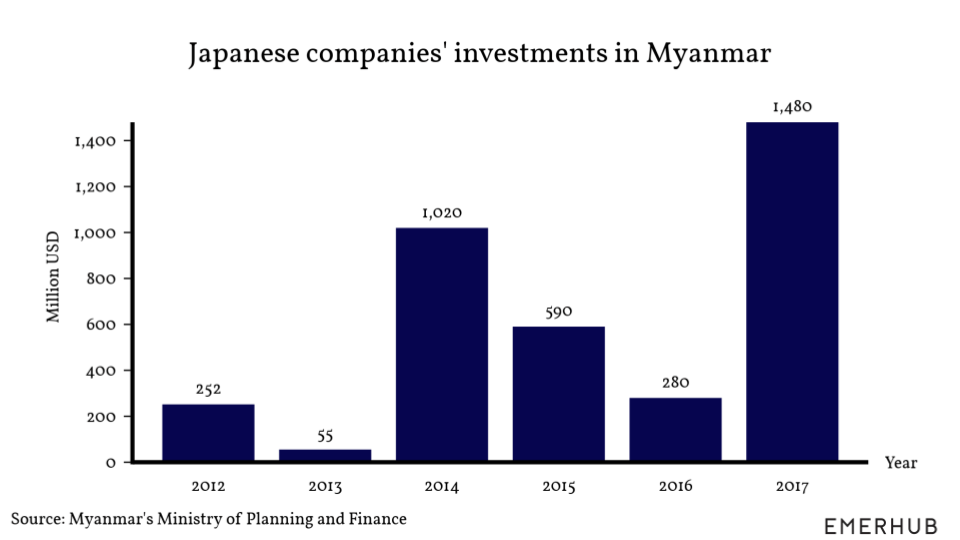 How to reduce investment risks in Myanmar?

Naturally, as with every business project, your Myanmar venture will carry a degree of uncertainty. However, there are ways to mitigate the risks of investing in Myanmar and overcoming challenges in such a promising market like can be very rewarding.

Outsource services to test the market

In fact, the fundamental purpose of a lean emerging markets’ strategy stands in market testing rather than theorizing which will allow you to limit your financial exposure and get real results.

An employer of record is a service provider that hires employees on your behalf. Most importantly, it allows you to almost immediately hire employees in Myanmar without setting up a legal entity or having to deal with local labor laws.

Consider using an EOR if you want to:

Import products to Myanmar via importer of record service (IOR)

Emerging markets such as Myanmar generally regulate imports highly. However, if you have physical products that you would like to test out in Myanmar, you can import them via the importer of record service (IOR).

Via an IOR, you will be able to import products to Myanmar without acquiring any import licenses nor setting up a legal entity here.

Watch Marlissa Dessy, the Director of Emerhub, explain the essence of our importer of record service in Southeast Asia:

Want to know more about outsourcing services to test a market? Contact Emerhub via the form below for an overview of your options.

Ready to invest in Myanmar?

If you have already proven that there is sufficient demand for your products or services here and want to start doing business in Myanmar, familiarize yourself with the requirements as well as the business structure options available to foreign investors.

We have brought out the general requirements for setting up a business in our step-by-step guide to company registration in Myanmar.

Want to learn more about how to invest in Myanmar? Contact us for a business consultation via the form below.

Photo by Harish Shivaraman on Unsplash

Let's grow your business in Myanmar