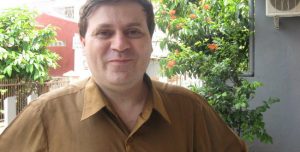 Originally from the Netherlands, Remko has become one of Indonesia’s most recognized developers for BlackBerry and Android platforms, hosting his own forum and managing a successful company from Bekasi.

Remko, when did you visit Indonesia for the first time?

I came to Indonesia for the first time in 2001. That was a private visit, I was dating an Indonesian girl who is my wife now.

When and why did you decide to stay in Indonesia?

It’s because I’m married to an Indonesian girl. We lived in Holland for a while and my wife missed living in Indonesia. After I got a good offer, I sold my company in Holland. As I was looking around for a new project, my wife suggested me to try it in Indonesia.

I have been an entrepreneur for my entire life. I have only had a job for one year in my life, for the rest of the time I was always self-employed.

What is your company doing?

My company is Dot.us Indonesia which is developing mobile applications for Blackberry and Android and also websites. One of the websites that we built is Jakartaglobe.com.

We also own websites that we maintain ourselves, like Infobunda.com which is for young mothers and pregnant women.

How is the mobile application market in Indonesia?

Indonesia has close to 60 million Facebook users. Most people use Facebook and internet via mobile devices. In the west, people still use internet from a computer at home.

Indonesia is a mobile market. That’s something that is badly understood. Most of the companies targeting the consumer market start by building a website. They don’t think about the mobile strategy whereas most of Indonesian people use internet via mobile.

Indonesia is a mobile market. That’s something that is badly understood.

Are you targeting more the local or international market?

I’m targeting mostly local market and we’re also looking to expand to other countries, for example Malaysia. But so far we’re purely targeting Indonesia although we have projects in other countries such as Australia and the Netherlands.

How about the availability of qualified application developers in Indonesia?

It’s a drama! Indonesian universities educate far too few IT professionals. A lot of companies need to get people from abroad. We have local staff but sometimes we need special expertize. We need to get freelancers from abroad.

Are local developers salaries competitive compared to rest of the world?

How are you finding clients for your company?

We have a sales person who handles that.

You mentioned your wife is Indonesian. Has it also been helpful for the business?

My wife has been very supportive. She’s an Indonesian and knows the Indonesian language and habits.

You live in Bekasi which is quite unusual for foreigners. Why did you choose this area? Has it been worth it?

I chose this area because my wife grew up here and she likes it. Since moving to Indonesia was a new thing for me I was totally blank with the places. It’s a great area with nice middle class. I have no problem living here. 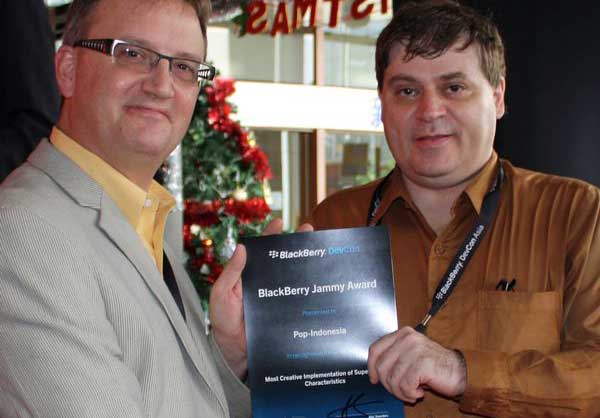 Networking with Dutch companies in Jakarta

Yeah! We have Indonesian Netherlands Association (INA) which is quite active organization. It holds gatherings for Dutch businessmen and Indonesian companies that do a lot of business with Holland. It’s quite helpful to be well conected with.

So far INA is the best place for networking.

What were the biggest challenges when starting your company and how did you overcome them?

It’s quite difficult to find financial services here, even though that wasn’t an issue for me since I had sold my business in Holland.

Insurance was also one of the biggest challenges. In the west, we can find all kind of insurances online but it’s very different here.

What are industries or sectors where you see a lot of potential for foreigner to do business in nowadays?

Insurance for sure. People hardly get insurance here. If somebody wants to do this business here, I’d be happy to be a partner and make the web portal for it as I see a great future in that.

Any tips for a foreign entrepreneur before they come to Indonesia to do business here?

If you have to do business with the government, it really requires a lot of local experts.

As an European, do you find any difficulties in adjusting to the culture here?

I don’t like all kind of sambal (chilli). Does it count as culture? (laughs).

What’s the difference between working with Indonesian and European employees?

Europeans are less afraid to speak up to their boss. Indonesians are a bit afraid so that you need to talk to your staff to make sure that they do their job properly.