7 Reasons Why The Philippines is Among Fastest Growing Economies

Table of contents #1 Rapidly growing economy#2 Young and growing workforce#3 Filipinos are very proficient in English#4 High level of infrastructure spending#5 Robust household consumption#6 Foreign direct investments#7 Government initiativesAsia’s economies continue to lead global growth and Philippines has its own fair share in it. For many good reasons. Be it the solid economic growth […] 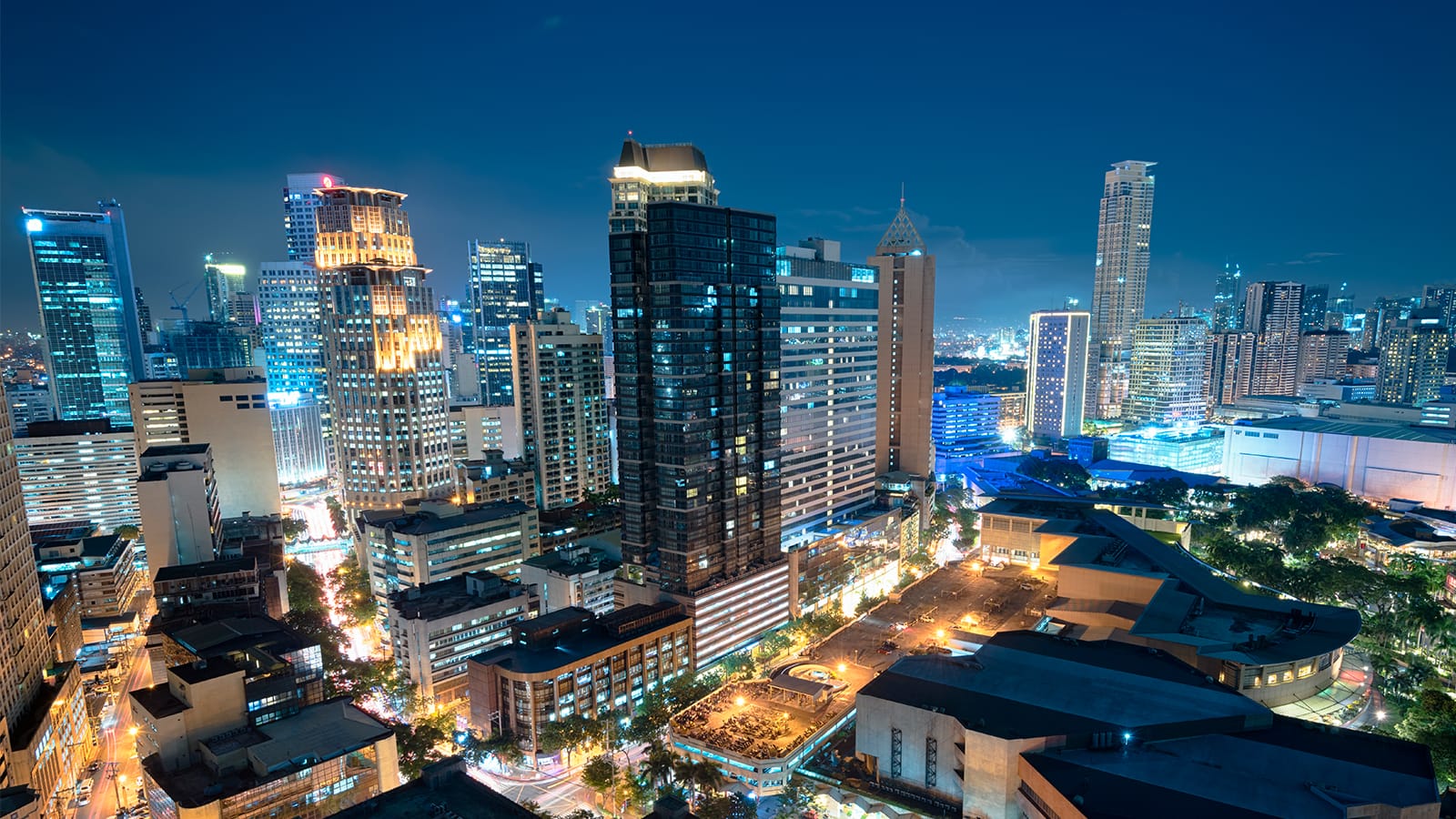 Asia’s economies continue to lead global growth and Philippines has its own fair share in it. For many good reasons. Be it the solid economic growth or the planned infrastructure spending up until 2022.

What are the reasons why the Philippines is considered Asia’s Rising Tiger? Is this the destination for you and your business?

To guide foreigners looking towards the Philippines, we have put together 7 pointers about the current status of one of the world’s fastest expanding economies.

Philippines is considered the 10th fastest growing economy in the world. The Duterte Administration is optimistic in maintaining and even surpassing this standing.

The GDP per capita growth is a strong asset in the benefit of the Philippines. In fact, Philippines had the fastest GDP growths in Asia in 2016. The economy grew 6.8%. Plus, only in the second quarter of 2017 it showed a 6.5% increase. 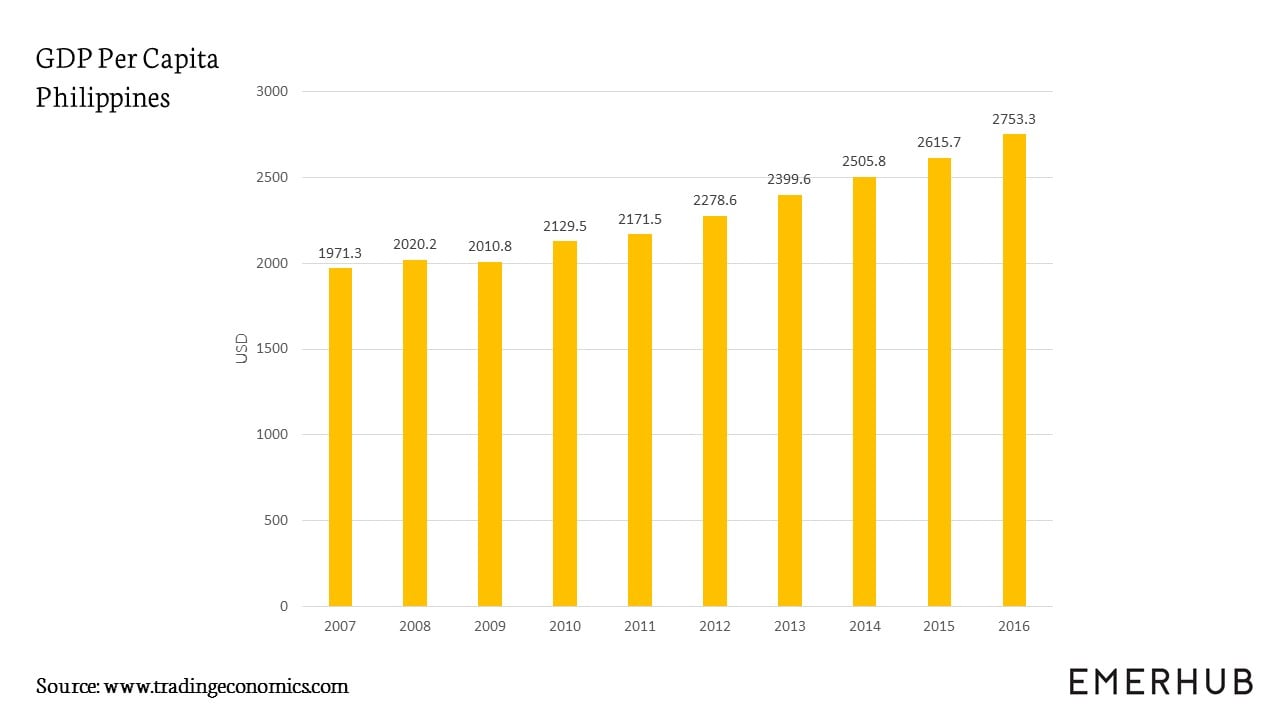 Here is a comparison how the Philippines is doing compared to some other emerging markets:

One of the reasons why the Philippines is a good investment destination is that here you will meet globally recognized, competitive workforce. The median age of the total population is 23.4. It is not uncommon for an emerging market to have such young population. However, compare this to Germany for example – this one of the countries with oldest median ages listed as 46.1.

Here is how the population in the Philippines is divided:

Most exciting perks of this population? There is a large young and growing workforce at hand. The population in the Philippines is among the fastest growing in the world. In fact, it is the world’s 12th most populous country. Envision the opportunities where there are over 100 million people with annual growth rate of over 2%. 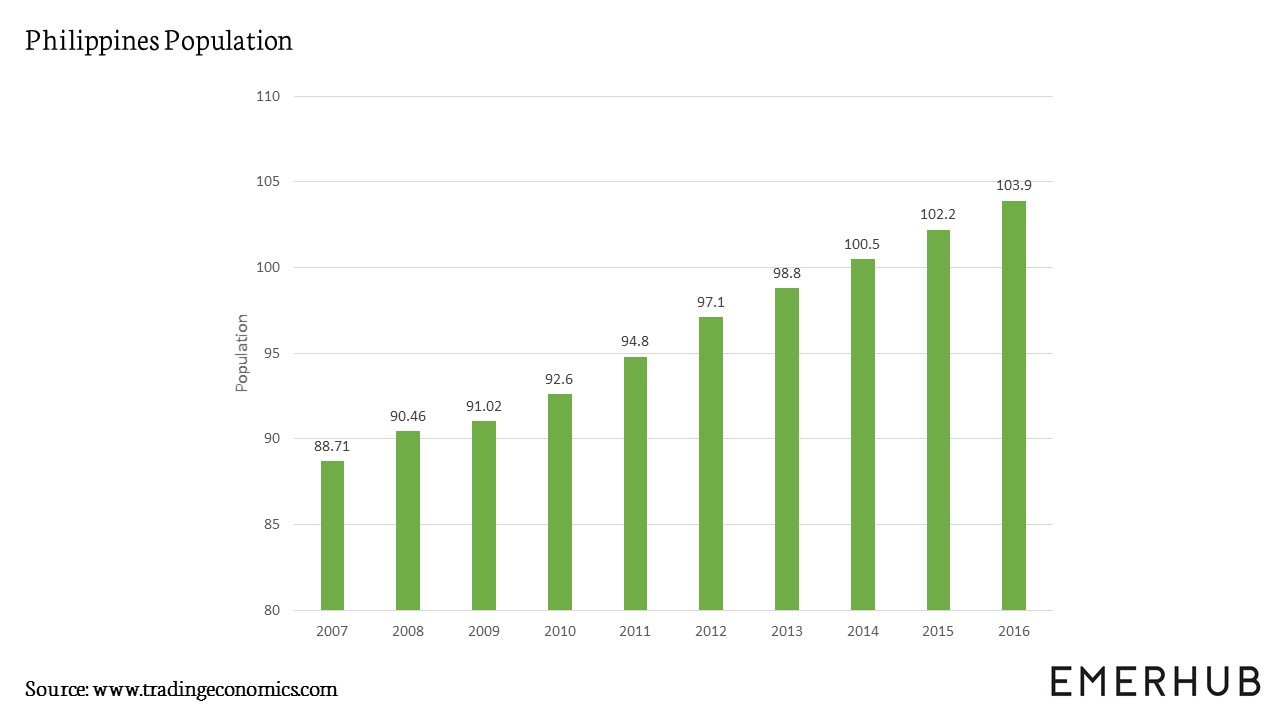 Over 60% of the country’s 15 years old and over population are in the labour force. Based on 2016 statistics more than half of the population is working in the services sector.

#3 Filipinos are very proficient in English

One of the country’s strengths that helped drive the economy is its proficiency in English. As a bilingual country with English being one of the official languages, foreigners will feel more confidence when conducting business here.

Philippines has received global recognition as one of the largest English-speaking nations. It ranks 13th in the English Proficiency Index worldwide. The language is spoken far better here than in Indonesia or in Vietnam.

So once decided to invest and set up your business in the Philippines, you and your clients will not experience difficulties when it comes to communication.

Despite the challenges of developing a well functioning infrastructure, the current Administration of the Philippines is taking it as one of their top priorities.

The government is under the “Build, Build, Build” regime. Also known as the Dutertenomics, this program is dedicated to to spend a record amount of P3.6 trillion on infrastructure starting from 2018 until 2020.

These are the actions that will lead to millions of jobs nationwide, improved flow of goods to and from the Philippines, lower transportation costs as well as increase competitiveness.

One of the reasons why GDP has shown such growth is the extensive household consumption that the Philippines represents.

According to FocusEconomics, the Filipinos chose to spend primarily on:

Consumer spending currently makes up as much as around 70% of GDP in the Philippines. The level of consumer spending is an important aspect for foreign investors to keep an eye on as well. Essentially this is what helps when planning your investments, for example when looking into retail. Some analysts however predict that consumption in the next five years will be slightly more modest.

According to The World Bank, the Philippines now ranks on the 99th position in the world when considering the ease of doing business. Plenty of foreign investors may agree, as the foreign direct investments (FDI) were up 40.7% by the end of 2016. This is a record high number for the country. With the foreign direct investments total of $US 7.9 billion, the Philippines even exceeded the central bank’s forecast of $US 6.7 billion.

Recent governmental initiatives see a better delivery of governmental services to people. As referred so by the Department of Information and Communications Technology. Here is what have undergone development and gained government’s attention:

The purpose of iGov is integrating major frontline government services for easy access to all services. CeC will also be implemented under the same environment. The aim is improving infrastructure of information and communications technology.

In addition to the above, the new Philippine Development Plan 2017-2022 was approved in February 2016. The government’s idea is:

In order to reach an even more inclusive growth, this plan marks down government’s medium-term policy priorities.

Reach out to Emerhub consultants via company registration in the Philippines or by filling the form below.

How can we support your company in The Philippines?

Hiring a Virtual Assistant – 10+ reasons to look into the Philippines

Most executives don’t know how to get the most out of their virtual assistants. It’s a skill and it can be learned.

What is the best way to hire a virtual assistant in the Philippines?

There are many ways to hire a virtual assistant in the Philippines. Choose one that meets your objectives.

Outsourcing to the Philippines: How EOR outperforms BPO

Find out why Google outsources over 50% of its employees and how this staffing solution saves them time money and provides them with the flexibility to innovate more quickly.

Remote Team: Why You Still Need to Work With One Post-Covid

Even after the pandemic is over, most businesses that are capable of staying remote will remain remote due to the myriad of financial and logistical benefits. Find out what they are and how they can help to grow your business.

Business Permit Renewal in the Philippines

Here’s what you need to know about annual business permit renewal in the Philippines.