Home » Blog » Vietnam » Is Hanoi or HCMC a better business location in Vietnam?

Is Hanoi or HCMC a better business location in Vietnam? Selecting a business location in Vietnam often comes down to seeing the pros and cons of Hanoi or Ho Chi Minh City. And for a good reason as those are by far the biggest and most important hubs in Vietnam.

However, we also explore some alternatives. How about building up your business in the major maritime city Da Nang? Or Haiphong, an industrial hub with a population over 2 million people.

Where and why to set up business in Vietnam?

Choosing a location for the business usually comes down to the following aspects:

Here are the 10 biggest cities in Vietnam to consider:

Ho Chi Minh City is the economic hub of Vietnam. According to Jones Lang LaSalle, demand for office space continues to grow 8-10% annually over the next ten years as HCMC continues to grow faster than the rest of the country. Note that HCMC population is 8.611 million, as was recorded at the end of 2017. The key benefits of the dynamic HCMC are:

The Vietnam E-Commerce Association announced in 2017 that both HCMC and Hanoi are considered as highly developed locations for e-business and lead the Vietnamese market. With only a slight gap in between the two, HCMC led the list with 78.6 points, followed by Hanoi 75.8 points.

Hanoi as the political centre

Hanoi is home to most of the legislative and government bodies. In terms of economic growth, it is a little bit behind Ho Chi Minh City. That also results in lower labour costs.

Thanks to its geographic location and connectivity to neighbouring countries, Hanoi trading opportunities are extremely convenient, either for domestic or international routes. Plus, almost all ASEAN capitals are reachable via air transport within 3 hours, making life convenient for travelling entrepreneurs.

HCMC is busy, yet known for a more casual and vibrant feel. This also reflects in the business attire. More and more people on the streets seem to have adjusted their office-gear according to their lifestyle. Hanoi mostly respects the sleek white-collar appearance.

When doing business in Hanoi, greet or be greeted with a cup of hot tea. Traditions are kept in honor so often you see that tea is poured into a cup (and using the same one to fill the next). If coffee has been your treat during workday, you will get used to the Hanoian style strong tea rinsed with plenty of tea leaves. Meanwhile, in HCMC the life is simpler and it is likely you’ll see people carrying a soda or a Lipton tea.

It is rainier and colder in Hanoi compared to HCMC. Forgetting your raincoat every now and then is a real downside when running from one business meeting to another.

Whichever destination is more compatible to your business needs and personal expectations, both HCMC and Hanoi are listed as the world’s most dynamic cities: 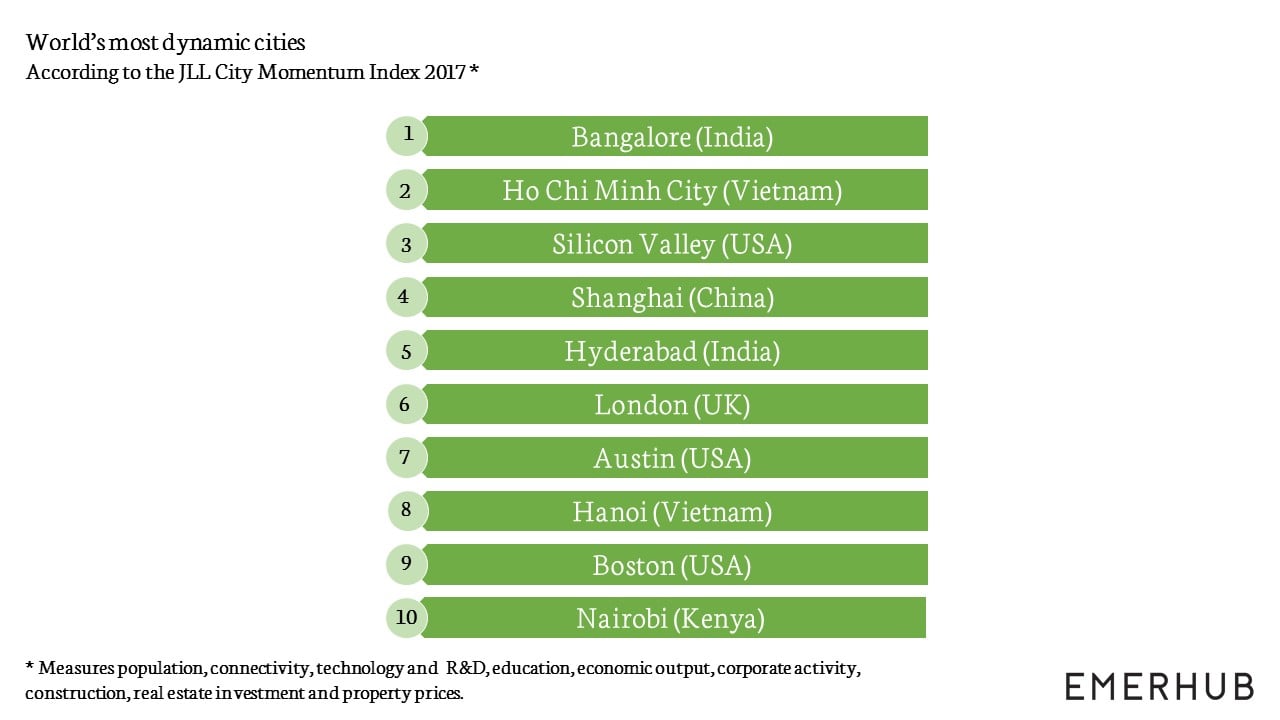 Both HCMC and Hanoi are highly used for foreign investments. This means the process of setting up a company in these two areas is normally smoother than anywhere else in the country.

Remote locations might have less experience with foreign investors, thus the process can be lengthy and not transparent. Despite that, the same very remote locations provide many investment incentives.

While most foreign investors choose between Hanoi and HCMC, there are several 2nd tier cities in Vietnam to consider. Many of them come with a population higher than 1 million people and various strong economic benefits.

Haiphong with over 2 million people

Haiphong is Vietnam’s third largest city. Located in the northern part of the country, this city’s population has reached 2 million people. Haiphong is commonly highlighted for its value as a seaport. Thus, the profile of the city matches with foreign investors looking into the maritime industry.

Also, Haiphong was the country leader in foreign direct investments in 2016 which shows the increasing curiosity amongst investors towards maritime business. The amount invested was US$ 2.74 billion.

Here are some of the features why an investor would benefit from setting up a company in Haiphong:

Da Nang with over a million people

Knowing the benefits of HCMC and Hanoi there are alternatives worth considering for your business location in Vietnam.

Here are a few benefits of setting up a company in the country’s fourth largest and picturesque city, Da Nang:

With the extensively improving infrastructure, the city sees potential in several business fields. In fact, according to VietnamNet, Da Nang’s IT and communication sector earned US$ 58 million from software exports last year.

City’s coastline is appealing for real estate while excellent international air connectivity makes trading convenient. Entrepreneurs in the seaport and airport logistics can benefit from choosing Da Nang. In fact, the Da Nang port joint-stock company starts with the 2nd stage of the Tien Sa port expansion project. Traffic in the port will develop and there is capacity for more large size vessels. A successful outcome will result in investors having an increased amount of opportunities for trading.

When setting up a company in Vietnam, you want to know about the competitiveness in the market in advance. Da Nang is also continuing to lead the rankings of Provincial Competitiveness Index amongst the 63 Vietnamese provinces and cities.

Find more information in our previous article about business opportunities in Da Nang.

Labour force in Vietnam is relatively young, cheap, large and skillful. However, the salaries still vary greatly between rural and urban areas, as well as depend on the field of expertise.

Some of the highest paid professions in Vietnam are in the field of:

Also, based on First Alliances Salary Report for 2016, below is the average wage expectation in the two cities:

While in the chosen fields the expected wages are higher in HCMC, the salaries often vary in real life. What also counts is the size of the company and how many years of experience a candidate has.

Living costs have very much to do with you being successful in both your personal and professional life. Hence, to remain or develop a better quality in life, here are some facts to consider before choosing your business location in Vietnam: 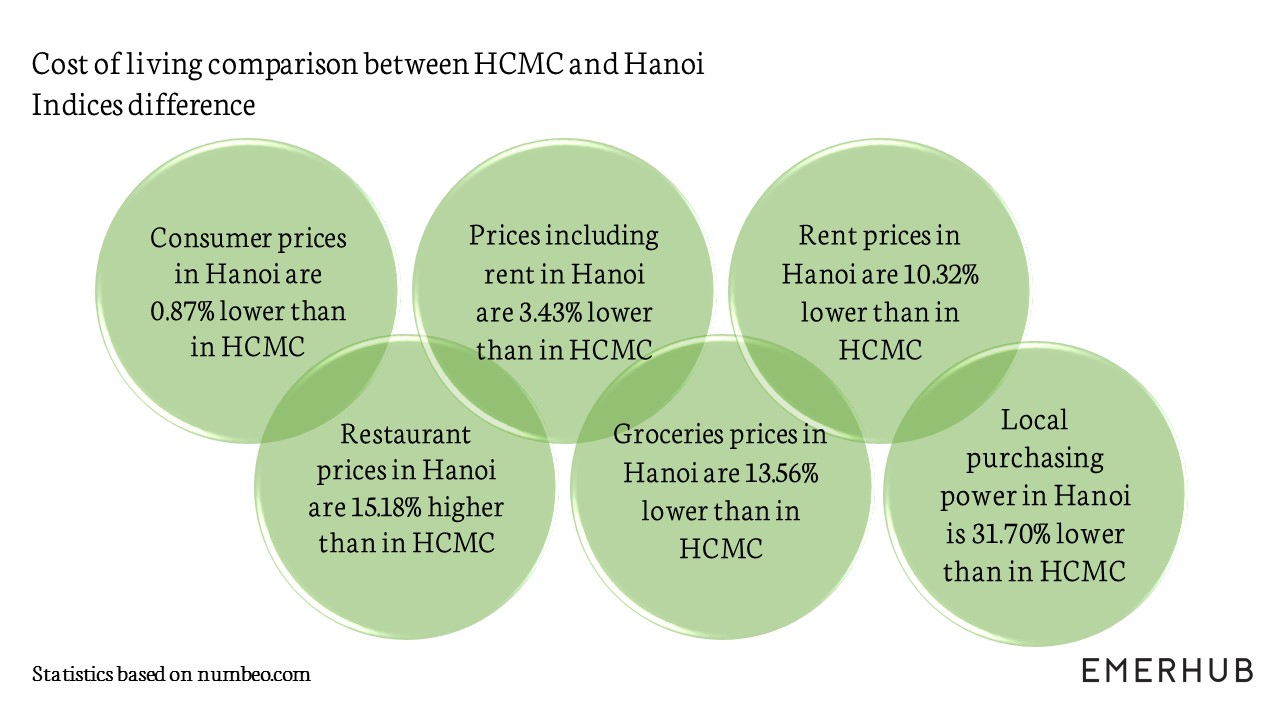 According to the cost of living survey by The Economist Intelligence Unit, Asia hosts five out of the world’s six most expensive cities. However, in the 2016 ranking list, Hanoi is on the 59th position and HCMC on the 78th position.

Doing business in more than one region in Vietnam

An investor can open a branch office when parent company wishes to expand their activities across different locations, either within the same locale or in a different country. Though, for a foreign branch registration in Vietnam, the parent company must already be registered for at least five years. If you have the headquarters registered in Vietnam, there is no such time limit restriction.

If you plan on registering headquarters in Vietnam, options are setting up a Limited Liability Company or a Joint-Stock Company. See our Vietnam Country Manager giving an easy-to-grasp overview of the 4 legal entity types in Vietnam:

Make sure to let us know in case of any questions or concerns by reaching out to us via the form below. For a company setup in Vietnam, click here and share your details so our specialists can get back to you.

Getting started with importing aquafeed into Vietnam

Fish, shrimps, and other types of seafood are some of the fastest-growing export items for Vietnam. However, with the rapid growth, the country is struggling to produce enough feed for the seafood. This creates abundant opportunities for foreign companies to import aquafeed into Vietnam.

Despite challenging times in the world because of the pandemic and ongoing tensions between the United States and China, Vietnam’s economy has still proved to be one of the most resilient.