Home » Blog » Vietnam » Should You Move Manufacturing From China to Vietnam?

Should You Move Manufacturing From China to Vietnam? 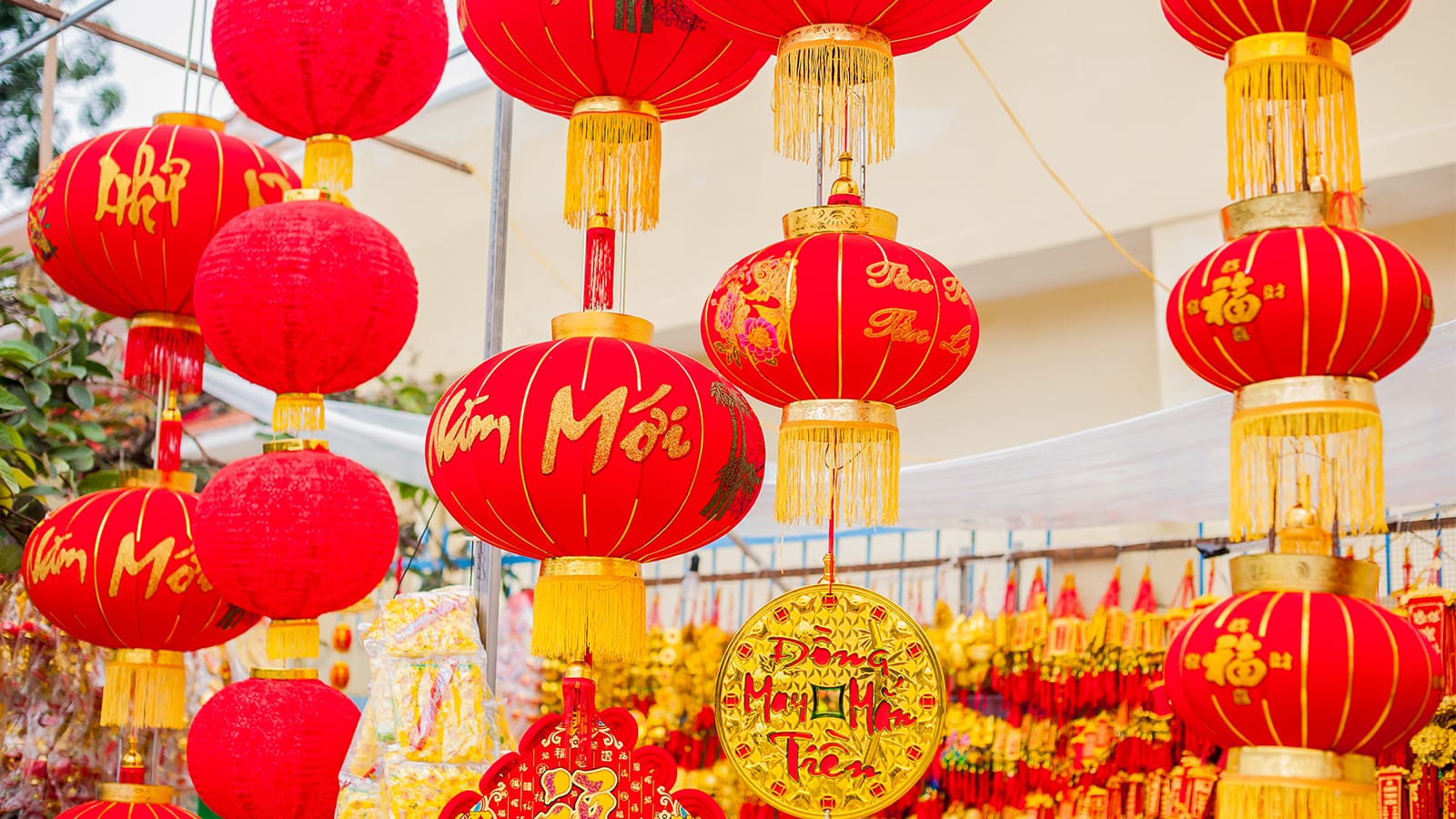 Moving manufacturing from China to Vietnam is a trending topic of discussion. This is due to the average hourly wages in the field in China reaching US$3.60 last year which means other Asian countries such as Vietnam are able to compete with the cost.

In this article, we discuss whether and when it wise to move your manufacturing over to Vietnam.

Chinese entrepreneurs are finding more opportunities in Vietnam as one of the key emerging markets. Suitable age structure and low minimum wages are an attractive asset, despite the yearly minimum wage increase in the country.

The statutory minimum wages in Vietnam have been adjusted as of January 1st 2017.

The above minimum wages are in effect from January 1st, 2017 and each of the four regions include a number of subregions as stated in detail in the Government’s Decree No. 153/2016/ND-CP.

When comparing the still relatively low wages to Chinese, we find one of the main reasons why manufacturing is moving from China to Vietnam: 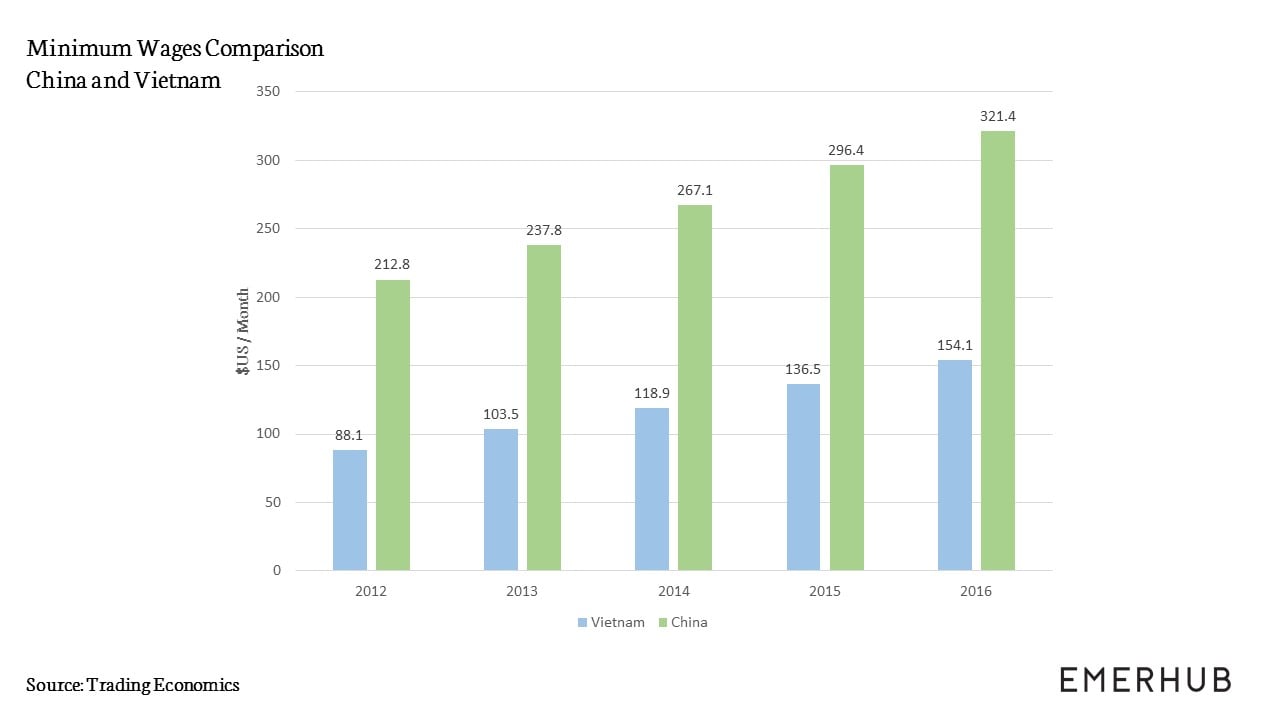 China has been known to dominate the manufacturing industry. In fact, this has been the central industry to China’s economic development. However, a survey carried out by Deloitte found that in 15 years most competitive manufacturing countries are Malaysia, India, Thailand, Indonesia and Vietnam. 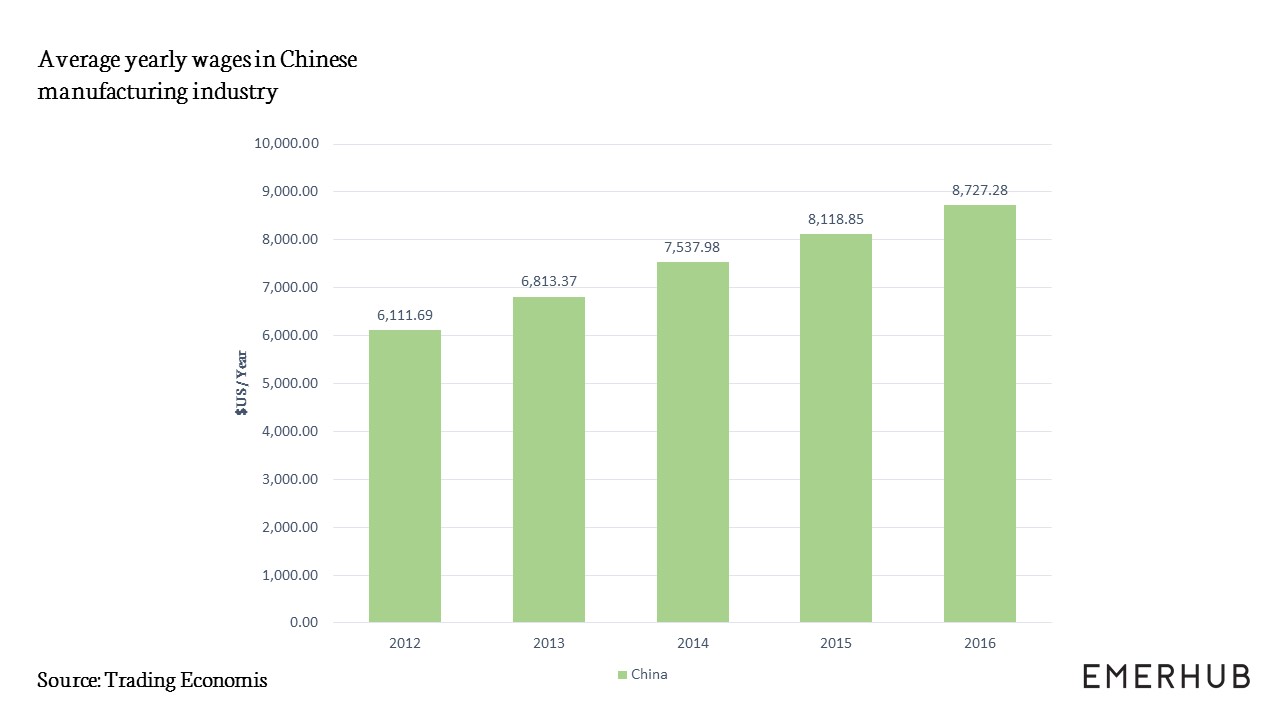 While the Chinese manufacturers wages see a strong rise and force investors to consider moving. The wages in Vietnam however remain lower and are at VND 5,428,000 per month (~ $US 239.1) in the first quarter of 2017.

Labour shortage is a fundamental issue in Chinese economy. While China is also facing troubles with slow minimum wage growth, the main concern is finding the labourers with necessary skills and capabilities to work in the manufacturing field.

According to The Diplomat, only 11.8% of businesses have marked the minimum wage increase as highly important factor influencing the wage levels. With the aging population of China, the labour shortages in the country however are influencing the industry most.

In benefit to Vietnam, the skilled labour is combined with young demographics and favourable political environment. 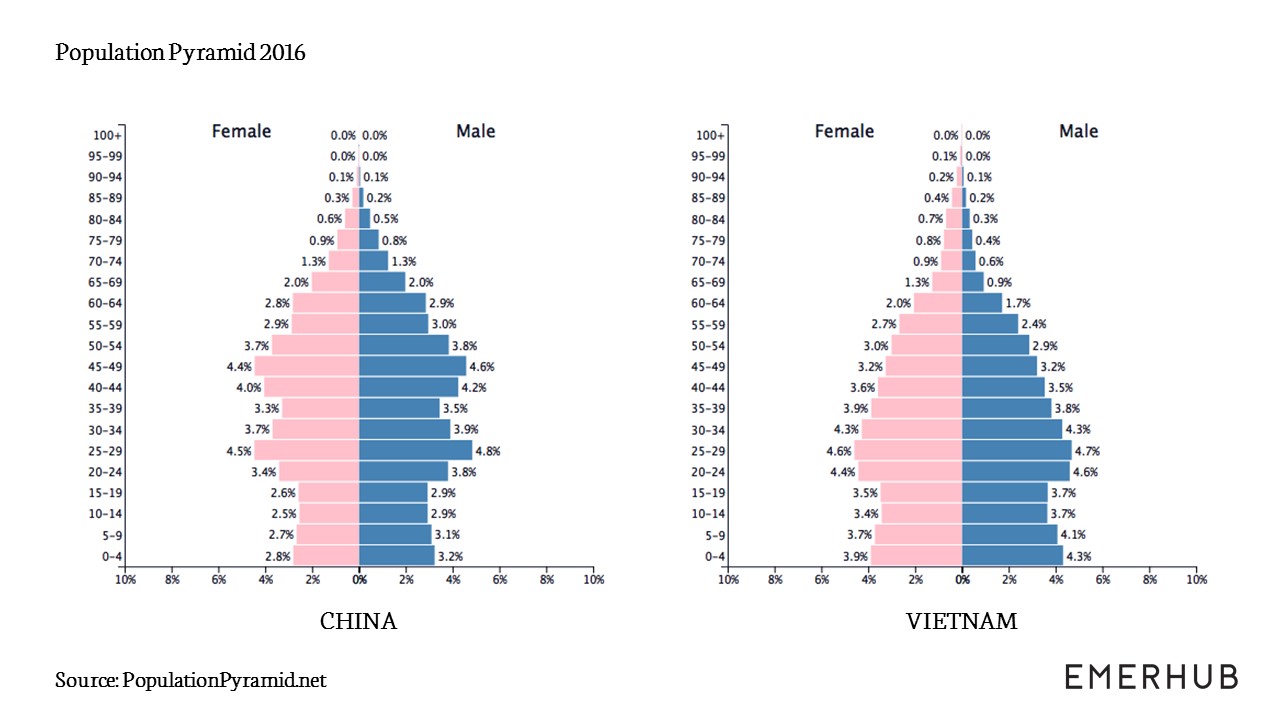 The country’s labour force includes 54.5 million people, majority of them young workers. In fact, 74% of the labour force is under 50 years of age.

While there are claims about difficulties in finding experienced workers, Intel has set a good example by starting a program to improve university-level engineering programs at Vietnamese institutions. The company has sent 73 of its Vietnamese team members to study abroad for 2 years.

The WTO member Vietnam is considered a favourable area for manufacturing. In fact, committed to improving the level of this specific business line, it has been made simpler to register a company in the field of manufacturing.

In addition to today’s market’s benefits, entrepreneur’s will enjoy the incentives after the bilateral free trade agreement (EVFTA) between the EU and Vietnam is signed (expected in 2018). Especially companies looking to export their products to Europe.

Sea connection and number of harbours

Close location to regional shipping routes and positioning in Asia allows manufacturers entering Vietnam to emphasize on export. Country benefits from having a ~3200 km long coastline and a number of seaports. Thus, the sea connection to Vietnam is one of the key values for foreign investors.

Three largest ports in Vietnam are: 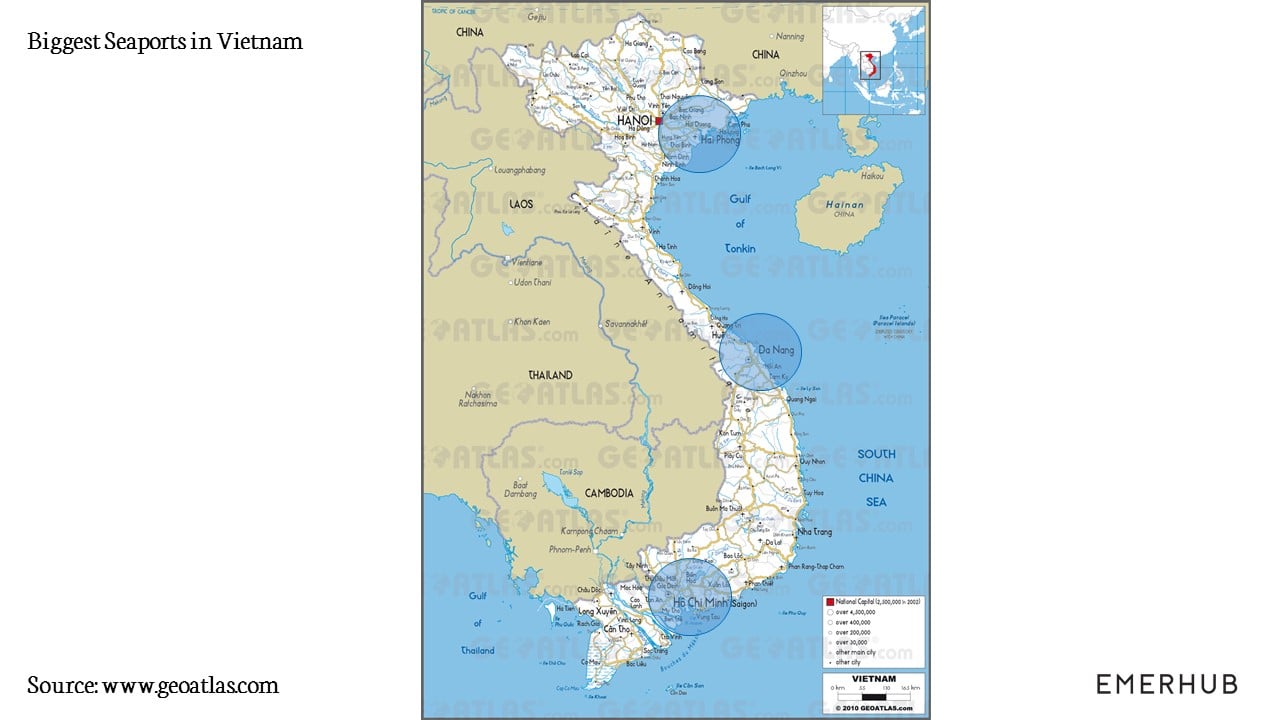 Vietnam Seaport Association announced in 2016 that their concentration goes to improving the port logistics. This simplifies the life of manufacturers importing their goods out of Vietnam.

In fact, in Hai Phong, a new port project is ongoing and will start operations in 2018 to double the existing port’s capacity serving hub’s nearby Hanoi.

In addition to well-developed sea connectivity the manufacturing industry has the support of excellent railway connection between Vietnam and China. The Kunming – Hai Phong railway is 855 km long, 466 km of it on the area of China and 389 km on the area of Vietnam. For example, a container truck is able to travel from Kunming to Hai Phong within around 9 hours.

Overall, railways continue to be an important way for cargo transportation in Vietnam – both for domestic and trans-border trades. According to Wikiwand, the first quarter of 2017 saw 166,200 tons of freight shipped by rail on the trans-border line – a 66.2% increase from 2016 and all time high looking back to the last 12 years. 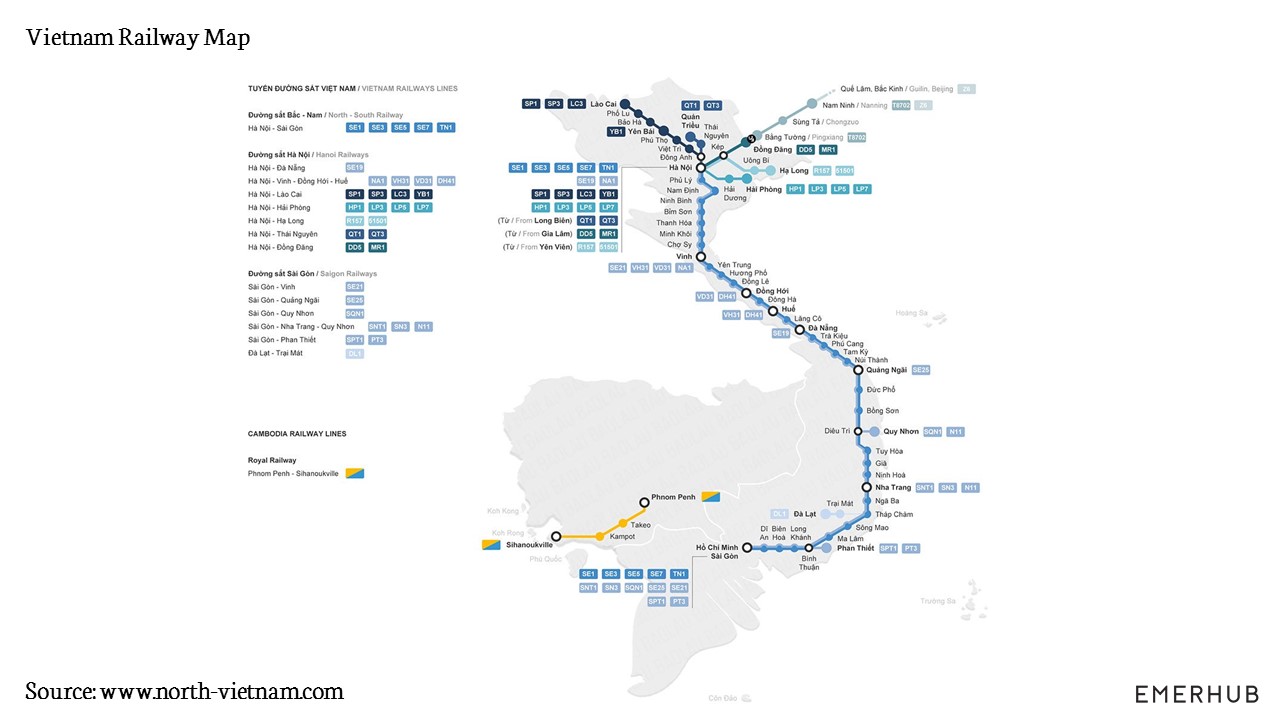 If in doubt, one of the reasons why not to move your manufacturing from China to Vietnam is that the market research shows your production abroad is not going to be beneficial.

For instance, the cost of certain materials in Vietnam may not be as competitive as in China. Thus, check the availability of materials in your line of business in advance. Let’s take the textile industry as an example – it is heavily dependant on the import of raw materials and can suffer under the lack of raw materials.

Whilst, once these have been imported from neighboring countries, Vietnam can provide one-part service of making the fabrics into garments.