Do Digital Nomads in Bali Need to Pay Taxes?

Does the tax law in Indonesia applies to digital nomads in Bali and do they need to pay taxes? Let us make that clear for you. 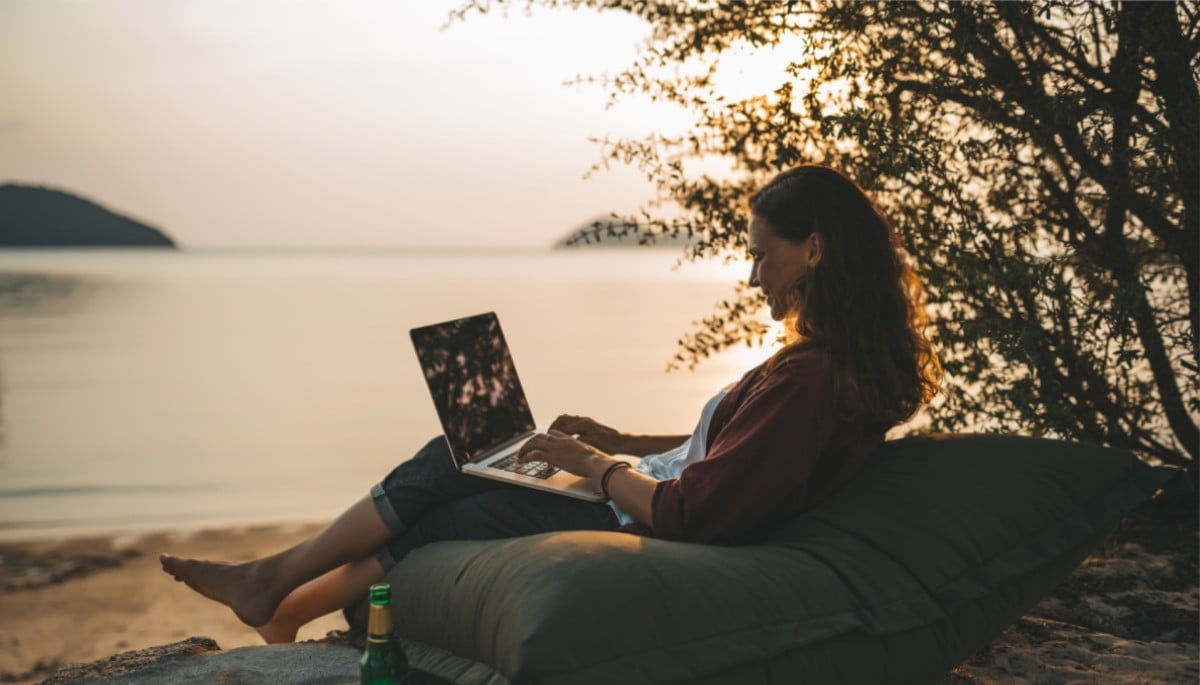 The topic of digital nomads and their taxation has been trending in Indonesia. Especially since the deportation of an American digital nomad, Kristen Gray, from Bali in January 2021.

Let us make that clear for you.

What makes a digital nomad a tax resident in Bali?

There is no particular tax law on digital nomads in Indonesia. Nonetheless, Indonesia has the same general tax law framework as most countries.

Spending more than 183 days in Indonesia

Suppose you spend more than 183 days per year physically in Bali. As a foreign digital nomad, you are considered a tax resident in Indonesia and should report your global income in Indonesia.

This means that if you spend more than 183 days a year in Indonesia, you should apply for a stay permit (KITAS).

Having a KITAS valid longer than six months will also make you a tax resident in Indonesia. Eventually, after you cancel your KITAS and leave Indonesia for good, you must make sure to cancel your tax card as well.

It is vital as you will still need to report your income in Indonesia if you have an Indonesian tax card. That is even if you have already been living somewhere else.

Not reporting your taxes in Indonesia will cause you to get a tax bill or, worse, deportation if you are physically in Indonesia. Let Kirsten Gray’s mistake become a warning for you not to evade taxes.

Gray extended her stay permit in Bali, which is longer than 183 days. Yet, she did not report nor pay taxes for money earned in America from selling her eBook on moving to Bali.

Following her deportation, the Indonesian government and the tax authorities are now more on the lookout to collect taxes from digital nomads in Bali.

Is double taxation an issue for digital nomads?

Many digital nomads in Bali only pay taxes in the country where they registered their business. Meanwhile, the business is not registered in Indonesia.

It is a common misconception that it is enough if the digital nomad reports and pays the corporate tax in the country where they registered their business.

Yes, it is enough from the corporate income tax perspective. However, if a person lives in Indonesia, the personal tax must be reported and paid as well.

Furthermore, if a digital nomad qualifies as a tax resident in Indonesia, they are obliged to report their global annual income in Indonesia. The common reason why they prefer not to report is to avoid the complex tax reporting process or double taxation.

Even as an individual tax resident with no business in Indonesia, you must still report your global personal income and pay taxes in Indonesia. It does not necessarily mean you have to pay tax on your global income.

Relief from double taxation in Indonesia

In most cases, double taxation will not happen in Indonesia. That is by reporting your global income correctly. In addition, by proving to have paid taxes in the countries where they earned their income and have a double tax avoidance agreement with Indonesia.

Indonesia has tax treaties with 67 countries. This also means that in most cases, double taxation is not an issue for foreigners in Indonesia, including digital nomads.

For instance, the appropriate amount of income taxes paid to the United States is allowed as a credit against Indonesian taxation. This is based on the Indonesia-USA double taxation avoidance agreement,

Most digital nomads face a common tax problem after spending more than 183 days in Bali. They have a visit visa (also called a business visa or social visa), not a temporary stay permit (KITAS).

Meaning that even though such digital nomads are de facto tax residents, they cannot report their taxes due to not having a stay permit (KITAS) and a tax card.

Below are the most convenient options for digital nomads to get KITAS and make their tax status legal.

If your business is registered abroad and you don’t generate income in Indonesia, setting up a representative office in Bali is the fairest way to sort out your personal tax.

With a representative office, you can get a temporary stay permit (KITAS) with much fewer compliance obligations and costs than setting up a foreign-owned company.

Namely, a representative office is not allowed to earn any income in Indonesia. Thus, you don’t also have to pay and report income taxes from your business here.

As an illustration, below is the Indonesian standard monthly wage for foreign employees.

Use an employer of record service in Bali

If you do not have a company registered abroad or prefer not to set up an entity in Indonesia, you can consider an employer of record service. An Emerhub entity will sponsor your KITAS and take care of your payroll and tax compliance.

This option allows you to comply with the local tax law in Indonesia. Yet, it also allows you not to be attached to the country by not having a representative office.

This option is suitable compared to the representative office of a foreign company if you haven’t decided yet whether you would like to stay in Bali for a year or two or longer.

However, if you spend less than 183 days and don’t have a stay permit and tax card, you don’t have to report and pay taxes in Indonesia.

Thus, there will be no need to set up a representative office in Bali nor use an employer of record service unless you provide services in Indonesia.

What happens if you avoid your tax obligations as a digital nomad in Bali?

Making any significant investment in Bali without reporting and paying tax

If you make any significant investment in Bali, the Indonesian tax authorities will be interested in the capital source. For example, if you lease a property for long-term in Bali for USD 250,000, the tax office will get curious about where this money came from.

Especially if you have been in Indonesia for several years, have not declared your income in Indonesia and cannot verify the source of money, and whether you have paid tax for the sum of money.

In such a case, the Indonesian tax authorities will assume that you earned this income in Indonesia but did not report and pay tax from it. Hence, they will issue a tax bill for you.

Reporting and paying taxes only from income earned in Indonesia

Another common mistake made by digital nomads with a temporary stay permit and tax cards is that they report and pay taxes only from their income earned in Indonesia. This is often a small portion of their global income.

Similarly, tax authorities will evaluate your lifestyle and spendings. Suppose you have declared a minimum salary and paid tax from that purely, but your lifestyle (e.g., rented villa) shows that you spend more than declared.

In that case, the tax office will assume you are avoiding tax payment in Indonesia and start a personal tax audit. These audits are rare but, in many cases, end up with a tax bill.

The Indonesian tax system is self-reporting; you are supposed to report and declare your taxes yourself. The tax authorities impose the taxes only in case of an audit.

The Indonesian tax authorities impose your personal income tax on your worldwide income. They impose after deducting any tax exemptions and relief.

In Indonesia, personal tax rates are as follows:

To ensure the optimal way to go about tax reporting, we suggest doing tax planning instead of waiting and hoping there will be no tax issues.

Plan your taxes in Indonesia with a professional service provider such as Emerhub.

Reach out to us via email at bali[email protected] or fill in the form below.

Frequently asked questions on taxes for digital nomads in Bali

The Indonesian Tax Office can ask for documentation as proof to check if you have paid taxes in the  country where income and assets are located. If there is no tax treaty with Indonesia, there is also a risk of getting taxed in Indonesia.

If the tax office discovers that you have not reported your actual income, you are requested to amend your tax report. If there are any unpaid taxes, you must pay the taxes retroactively. In addition, you must pay late reporting penalties, interest, and fines.

A foreign national is considered a tax resident when spending Indonesia for 183 days or more per year. The foreigner is considered intending to reside in Indonesia if they apply for KITAS valid for longer than six months.

Contact us at [email protected] to get the complete list of personal income tax rates in Indonesia.

How can we support your company in Bali?

Let's grow your business in Bali

There are still many aspects to keep in mind. Read the common mistakes that can ruin your experience when hiring freelancers in Bali.

How to Set Up a Diving Center in Bali

Good news if you’re interested in setting up a diving center in Bali. Diving center business is now open for foreign ownership.

Here are some ideas to share about management and running a business in an emerging market from Emerhub’s former Bali branch manager.

Common Mistakes With Starting a Business in Bali

Emerhub’s Bali Branch Manager joined in on a deep-dive open-format Q&A of SpeakUp Monday. Below is a short transcript of the interview.

When Should You Consider Using a Nominee Company in Bali?

In this article, we describe common scenarios when special purpose vehicles, i.e. nominee companies, are a suitable alternative.

4 Things You Need to Do Before You Leave Bali

There are crucial things you need to do before leaving Bali. This article will cover the four things expats need to do to avoid issues in the future.