Labor Costs in Indonesia and the Employment Culture 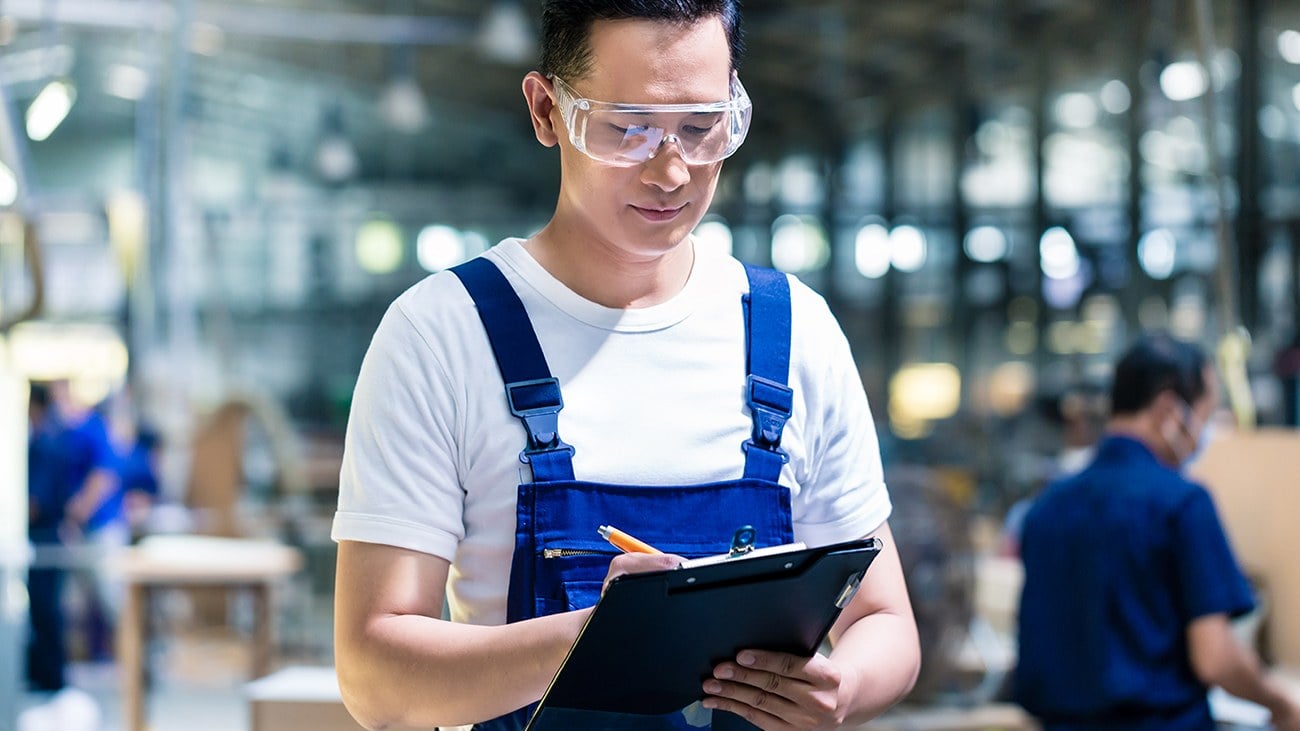 Some labor costs in Indonesia can come as a surprise to foreign business leaders – many due to not being familiar with the law, others due to cultural differences. This article will teach you the ABC’s of the country´s labor costs and employment culture.

Minimum wage in Indonesia is different across the country’s provinces and cities. They are determined by regional wage councils and revised annually.

How minimum wage is calculated in Indonesia?

The Indonesian government accepted a new mechanism to calculate minimum wages in 2015.

The new system takes into account both the current fiscal year’s inflation and GDP growth rates. However this formula is not applicable in eight provinces where minimum wage is still below government determined basic cost of living.

While Indonesia still has one of the lowest minimum salaries in the region it is also increasing very quickly: 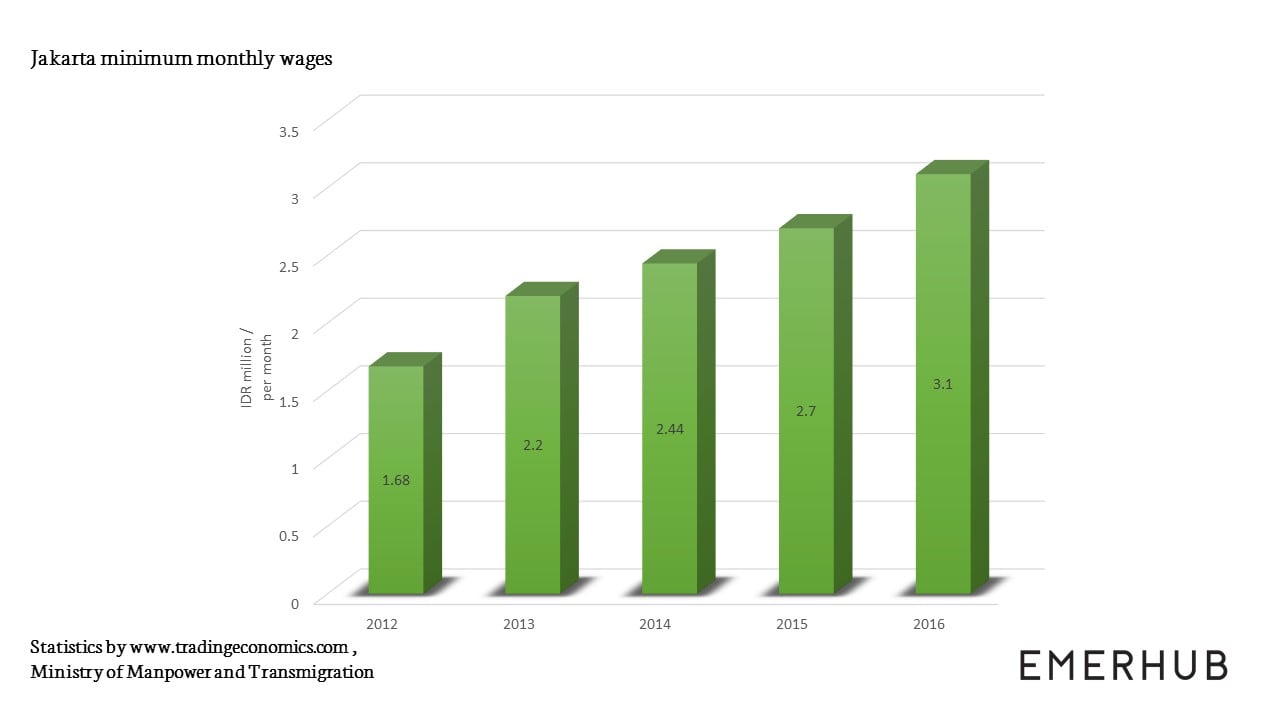 The demonstrated salary increase means that Indonesia, especially Jakarta, is no longer able to compete with cheap labor and the reasons to invest need to lie elsewhere. While in the long run it should push companies to increase their productivity it has it’s short and medium term implications.

The negative impact may especially occur amongst lower level workers, who could eventually be led to unofficial employment.

It has also created a situation where university graduates get similar salaries to low skilled labor.

Indonesia does not have a national comprehensive database that would publish accurate salary data. Therefore we need to rely on the studies conducted by third parties.

In this article we use the data provided by Kelly Services. We advise to take the information with a grain of salt since salaries are a sensitive topic and often the numbers seem inflated. However, the salary proportions between different positions seem accurate.

Generally, the highest salaries are in Jakarta. There are of course exceptions to this rule – one of these being the well-paid mining sector.

The top highest paying industries of 2016 were:

Meanwhile, the same study points out the following as most desired jobs by job seekers for 2016:

The income levels in Indonesia are characterized by extremes in contrasts between rural and urban or low-skill and executive. What may also have an effect on the number written on the paycheck is often defined by:

It is often the case that new employers ask candidates previous pay slip and consider this when calculating the offer. Candidates usually expect a 10-20% increase when changing jobs.

Be wary of the candidates that ask for less salary than they received in their previous job. It usually means the candidate got (or is going to be) fired in the previous company. Find out why and whether it’s acceptable for your business.

Other sources for finding salary data

Besides formal reports you can also look into sites like Qerja.com (in Indonesian) where users can review their employers and give information about their salaries. Note that most companies have very few submissions so focus on the data of bigger companies. 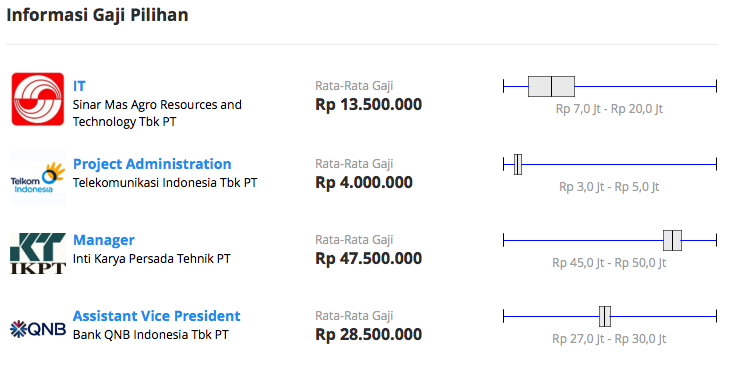 Recently graduated employees are also very active job seekers. It’s common to receive candidates that have held 3 jobs in the 2 years since they graduated.

Salary expectations vs. reality in Indonesia

We already mentioned that candidates usually expect a 10-20% increase compared to their previous salary.

For example, if the candidate is married and has children then the salary expectations are automatically higher – because personal expenses are also bigger. This is especially true for men as they are expected to feed the family. Many companies therefore cover the health insurance for all the dependents.

Interestingly the job responsibilities play a bigger role in the salary expectations than what managers from Western countries might expect. Candidates are often willing to accept lower salaries for desk jobs perceived as “easier” (such as data entry) while expecting more salary for more stressful jobs such as sales.

The latter is also one of the reasons why civil service jobs are in high demand. It offers job security and you don’t need to seek for customers.

There are few mandatory costs that companies operating in Indonesia necessarily have to comply with on personnel spending.

Amongst the variety of taxes in Indonesia, an individual person is a tax resident in case he or she fulfills any of the following criteria:

These terms do not apply only in case when they are overridden by a tax treaty.

According to the law employer is the body responsible for the calculation of any taxes that need to be withheld from salaries, monthly payment of these taxes to the tax authorities, and provision of annual numbers to the employee. The individual employee must then file an annual income tax return for the year in question.

Indonesia has embraced a new health insurance policy in 2016 making it mandatory for all employees to obtain it via Social Security For Manpower (BPJS) programs. This means that the employer is required to register their employees, while non-employees can simply register online.

For a carefree employee insurance submission via Emerhub, following documents are needed:

The registration process for health insurance via Emerhub takes up to 1 month.

In addition to providing a more stable health insurance in Indonesia, the government has put an effort into developing a greater and more sustainable health care system in the long run.

Managed by the BPJS Kesehatan, the aim is to provide universal health care by 2019. Indonesia´s courageous plan is part of the framework of the 2030 Agenda for Sustainable Development.

According to the employee religion, they receive a yearly Religious Holiday Allowance, or Tunjangan Hari Raya Keagamaan. The employer is obligated to pay the allowance a maximum of 1 week before their respective religious holiday.

For Muslim workers, this means before the Eid-al-Fitr, for Christians, before Christmas. For other faiths, either before the respective holiday or they choose to have it before the Eid or Christmas (depends on the company’s policy):

If you asked an Indonesian person how much is their monthly salary than most people would reply with their monthly net base salary, not taking into account the 13th salary, bonuses or taxes.

There are around 12-15 formal public holidays in Indonesia. If the public holidays is during the weekend or on Thursday or Tuesday the government may add an additional collective leave day.

Besides the public holidays an employee is entitled for 12 days of paid vacation after one year of uninterrupted employment.

Public holidays in Indonesia in 2017

The Millennials, also known as the job-hopping generation are quite a challenge from the employers perspective. With the possibility to catch excellent talents amongst the young bright minds, there is a high risk of a very fast employee turnover.

While the short-term performance of an employee can be excellent and candidate worthy, the benefits of an employee hire can cost a lot of time and input from the company. Thus the companies are reluctant to invest in millennials as the return on investment is difficult to predict.

What also applies to Indonesia is the tremendous role of parents. They are not just influential but often make all the life decisions for their kids. Even if the kids are in late 20s, e.g. millennials.

Jos Ortega, the President of Havas Media Ortega, has recommended business heads to create services genuinely catching the attention of young people. He suggests to become an “experience resource” for them.

However, Techinasia has referred to positive behaviour of millennials in emerging markets. Instead of having constant movement in mind, it was brought out that millennials in Philippines are ambitious in attaining leadership positions. Over 65% see themselves as company representatives (leader or most senior executive in the current organisation). The same score was 38% in Germany.

Being an entrepreneur of the world, be prepared that the level of English you’ll witness might not be according to expectations everywhere in Indonesia.

As it happens, it is a big challenge as most university graduates (especially if they don’t come from the top universities), don’t speak much English. The ones who do usually learned English by watching movies or listening to music and therefore their spoken English tends to be a lot better than their grammar.

Providing language classes could be one of the ways of keeping an otherwise moving and restless millennial steady in your business.

There are distinct cultural differences to running personnel in Indonesia, some of them can go further than just etiquette and affect labor costs.

Appearances are important in every culture but even more so in Indonesia. Perception of the workplace is extended to employees and it is important to keep in mind that location, reputation and appearance matter.

Depending on the company and industry there are additional aspects that may motivate the employee:

From our blog you’ll find further information on how to manage Indonesian employees.

Our practice also shows that companies providing a better office in a better location will ultimately be able to persuade the wanted candidates. Having only these aspects may not keep your employee for a long term, however having decent facilities will help you win the candidate over at the starters.

Hiring can be time-consuming and without knowing the market may give lots of disappointing results. To save time and start filling your company’s positions via Emerhub’s recruitment service, fill the form below or reach out to us here.