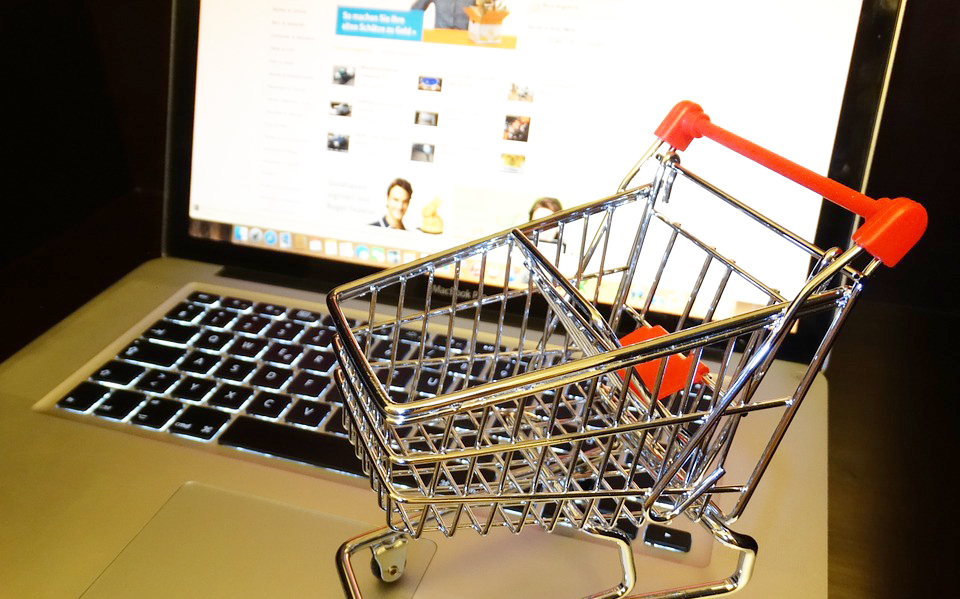 Starting an E-commerce company in Indonesia used to be in a legal grey area. Despite the uncertainty, e-commerce has been a very popular industry among both local and foreign companies.

In May 2016, Indonesia finally liberalised portions of the foreign ownership on E-commerce companies under the terms of its agreement with the DNI (Negative Investment List), a list of business sectors that are to be exempted from foreign ownership.

According to the latest DNI, e-commerce companies are allowed to have up to 100% foreign ownership but under certain conditions.

This article provides an overview of the new regulation and outlining Emerhub’s role in helping foreigners in governing 100% foreign ownership in the E-commerce company in Indonesia.

Government Regulation No. 17 of 2013 on The Implementation of the Law of the Republic Indonesia No. 20 of 2008 on Micro, Small and Medium Business is made to utilise Usaha Mikro Kecil dan Menengah/ UMKM (Micro, Small, and Medium Enterprises).

Criteria for each type of business activity under Article 6 of UMKM Law are as table below.

Presidential Decree No. 44/2016, which was issued in May 2016 to support the utilisation of UMKM, replaces the previous 2014 DNI (Negative Investment List) and reflects a trend of liberalisation of online trading policy in Indonesia.

Below is the summary of the newly issued negative investment list (DNI).

Partnership is a way for BKPM to utilize the Micro, Small and Medium Business.

In Article 11 of Government Regulation No.17/2013, Partnership is a process of transferring skills in the field of production and process, marketing, financing, human resources and technology in accordance with the Partnership system.

However, in Article 12 Government Regulation No.17 of 2013, large business is not allowed to own or control their UMKM Partners, and the same goes to medium to its micro and small business partners.

The partnership arrangement below shows a larger business has exclusive right and has more control of the business compared to the SMEs.

Other than the partnerships mentioned above, UMKM could do other kinds of partnership, such as setting up a PMA for as long as it did not violate the Government Regulation and the UMKM holds the proof of business license in Indonesia.

Emerhub’s core service provides any foreign investors to make a partnership agreement with us. As we specialize in assisting companies’ licensing, legal and compliance, our agents will easily help you understand and proceeding with 100% foreign ownership E-commerce company in Indonesia.

We also work as your consultants through every stage, providing you with assistance and regular reporting to make sure you are in the line with Indonesia’s business compliance.

Size of E-commerce market in Indonesia

E-commerce company in Indonesia has exploded over the past couple of years with the highest number of active internet users (74.6 million) compared to other ASEAN countries, and 8.7 million online shoppers with the amount of transaction of US$4.89 billion in early 2016.

Being the 4th most populous country in the world, the country’s Internet users is predicted to rise to 102.8 million users by the end of 2016.

Nielsen Media Research provides statistic on the most popular E-commerce categories in Indonesia, not surprisingly, are non-consumable—durables and entertainment-related products. Spending intentions for each have risen at a double-digit or near double-digit percentage-point rates since 2014. 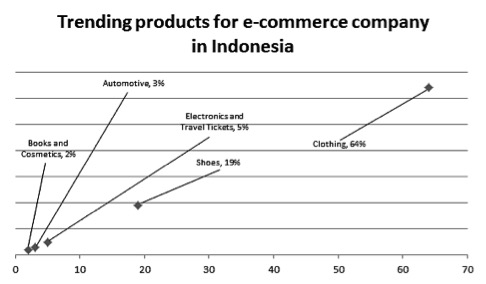 The chart below is showing Indonesia E-commerce sales that have increase by USD 0.93 billion since 2015 to early 2016. 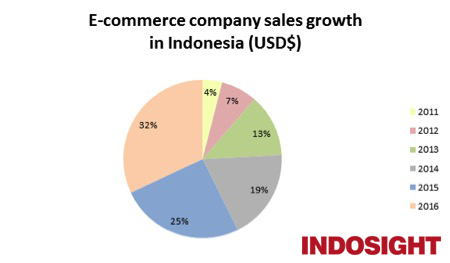 Source: MicroAd Indonesia, a Digital Marketing Agency based in Tokyo

You can directly proceed with 100% foreign ownership in E-commerce Company by registering your company with us.

Your partnership with us shall be in a form of written agreement which covers at least, but not limited to :

As you proceed the registration with us, we will guide you in establishing an E-commerce company in Indonesia, starting from procedures for company registration, setting up payment gateway and keeping up your company in compliance with Indonesia’s business and government requirements.

Partner with us today, by scheduling a meeting or email us [email protected]